Copyeditors don't have the splashy bylines of reporters or the lovable kookiness of art directors. They sit at their desks with bowed heads, poring over their well-worn copies of the Chicago Manual of Style, checking to see if "postimpressionism" is one word, two words or hyphenated. They hear "underway" in conversation, and they silently recite that it should be two words in every sense but nautical. They are ever vigilant for the stray or missing letter: A story about a public pool gets really gross really quickly without the humble letter L in "public." Or "pool."

Proofreaders from Calgary, ex-editors from Hustler, marketing directors from Tampa, professors, publishers and freelancers of all stripes are gathered in downtown St. Louis this weekend for the seventeenth annual American Copy Editors Society's conference. They wear buttons admonishing "Create It, Don't Copy It," and "Break It, Don't Fake It" -- both in reference to plagiarism scandals -- and they confess to groups of strangers about that one time they let the word "prostrate" get through in a story about prostate cancer. The anecdote is met with knowing, sympathetic groans. 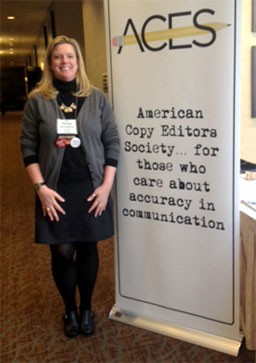 "The first conference in Chapel Hill, we had 300 people," begins John McIntyre, one of ACES' charter members and the night content production manager at the Baltimore Sun. "Somebody said that it was probably the largest gathering of copyeditors in one place at one time in all of human history. I went back to Baltimore and told that to my wife, and she muttered, 'Except in Hell.'"

He estimates he has had only a handful of Saturday nights off in the last 33 years.

McIntyre, author of the book The Old Editor Says, goes on to say that ACES was formed to give editors a voice and provide a forum where they could gather and improve their skills. During this three-day conference, word czars can choose from seminars with names like "Sweat This, Not That: Real Rules vs. Grammar Myths" and "Editing While Exhausted."

But even these well-mannered wordsmiths can get vicious, and not just about how many spaces should go after a period. (One, only, always.) Teresa Schmedding, ACES' president who's a native Missourian and a Mizzou journalism school graduate, remembers when the Associated Press amended its style guide, a widely used reference book in newsrooms. "It was a little bit of a smackdown. One year, when AP announced that they were going to spell out states' names in their datelines, it was a huge uproar. I thought people were going to start pelting them with stuff," she says.

The AP later returned to its old rule.

"'I can't control that my boss is mean to me, but what I can point out is that you screwed something up,'" she says. "Serious news readers have very little tolerance for errors. And typos and grammar mistakes are at the top of the list of things that really bother them."

More words are published today than at any other time in history, and the demand for editors is great. "There's always more of a need for editing than gets done," McIntyre says. "Frankly, still there's not adequate recognition of what we do and what the value of it is.

It must be the latter: Most newsrooms can no longer afford to send copyeditors to the ACES conference on the company dime, so many of the 400 people who've come are using their vacation days and paying their own way.

So be nice if you spot any of them wandering downtown. And seriously, let's all agree to that one-space-after-a-period thing. Ask a copyeditor why: They will be thrilled to explain it to you.