Man Responds to Craigslist Ad, Goes to Look at Car, Is Shot in the Face, St. Louis Police Say 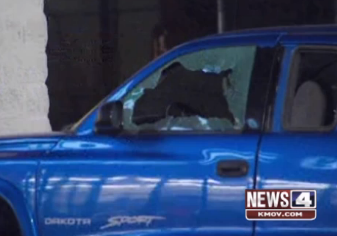 This sort of takes the fun out of buying a used car on Craigslist.

St. Louis metro police officials say that three individuals responded to a Craigslist car ad and went to take a look at the vehicle on the 4400 block of Elmbank Avenue around 7:40 p.m. last night.

When they arrived, two men approached them -- and started firing shots. The driver responding to the ad, a 39-year-old male, was shot several times in the face and the back, officials say.

Were the victims lured there under false pretenses?

See also: - Is This The Best Craigslist Ad Ever? - St. Louisans Desperately Search Craigslist for Busch Stadium Soccer Tickets - What Happens When You Search for Your Baby's Father on St. Louis Craigslist?

It's unclear at this time. A police spokeswoman tells Daily RFT that it's unknown yet whether the suspects, two black males, were behind the Craigslist ad.

Police say that once the three individuals arrived -- the 39-year-old driver, with a 36-year-old female and a 17-year-old male -- the two male suspects approached them while they were waiting for the seller.

"The victims were concerned for their safety and attempted to drive off when one of the suspects fired several shots," police say.

The bullets hit the driver several times. He managed to drove the 4300 block of Natural Bridge Avenue to a nearby auto parts store to seek help, police say. The shooting victim was taken to a local hospital, where he is listed in serious but stable condition, as of this writing.

A police spokeswoman says the suspects remain at large.

Here's a video from the scene last night via KMOV (Channel 4).

Incident: Assault 1st Location: 4400 block of Elmbank Dates: 04/03/13 @ 19:40 Victim #1: 39-year old white male Victim #2: 36-year old white female Victim #3: 17-year old white male Suspect(s): 2 unknown black males The victims were directed to the above address under the pretense of viewing a vehicle they observed on Craigslist. Once they arrived, they were approached by the suspects while waiting for the seller. The victims were concerned for their safety and attempted to drive off when one of the suspects fired several shots, striking the driver, Victim #1, several times in the face and back. Victim #1 drove to the 4300 block of Natural Bridge and called for help. The victim was conveyed to a local hospital and is listed in serious/stable condition. The investigation is ongoing.