Last night, Mayor Francis Slay, who officially won his historic fourth term on Tuesday, was at the gym when he got an important phone call.

"The president called from Air Force One," Slay spokeswoman Maggie Crane tells Daily RFT. "The mayor was at the gym. He obviously took time to take his call."

What did the president of the United States have to say to the reelected mayor of St. Louis?

Crane says, "He called last night to congratulate him on his historic win."

As expected, Slay secured his fourth four-year term this week, which means he will be the longest serving mayor in the history of the city.

"The mayor and the president shared their initiatives locally...[and nationally] about gun laws," she says.

Crane says Slay told Obama about the push in St. Louis to establish a gun docket, which would allow for a more focused approach to prosecuting gun crimes. For example, judges could be dedicated to gun crimes through a docket.

Slay is a member of Mayors Against Illegal Guns, a national coalition that has advocated for stricter gun policies and supported the president's efforts to reduce gun violence. And over the weekend, Slay participated in an event with the St. Louis chapter of the national group Moms Demand Action For Gun Sense In America, which has been active in Washington D.C. 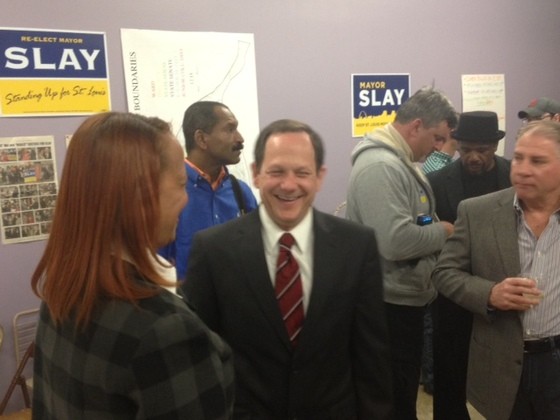 In the relatively brief chat, Slay also discussed health care with the president -- specifically regarding his support for Governor Jay Nixon's push for Medicaid expansion, which is being debated at the Capitol.

"It's incredibly meaningful when the president of the United States takes time out of his busy schedule to call a local mayor," Crane says, adding that Slay "was touched and humbled."