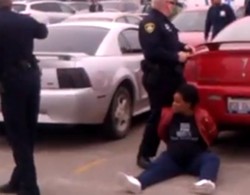 A woman who is eight months pregnant was tased by a Springfield, Illinois, police officer in a parking lot over the weekend in an incident that was caught on tape and has raised questions about the possible use of excessive force.

The dramatic footage, on view below, shows some sort of struggle that leads an officer to pull out a Taser and use it on the 29-year-old woman.

"Everything they did at this point that we've reviewed so far in reports and even in the video, they were within department guidelines," Cliff Buscher, deputy chief of criminal investigations for the department, tells Daily RFT.

Why did officers think a tasing was necessary?

The video, posted on YouTube over the weekend, now has more than 30,000 views. The tasing incident happens within the first ten seconds.

In the footage, the woman, who KSDK (Channel 5) identified as Lucinda White, is heard screaming, "Let me go! Let me go!" and, "I'm pregnant! I'm pregnant! I am pregnant!"

Officers are heard shouting that she is being arrested and one says, "You're getting tased!"

Others watching can also be heard screaming that she's pregnant and begging the officers to stop.

Eventually, she is handcuffed on the ground.

Daily RFT obtained a copy of the police report from Springfield police, on view below, which offers some details on how the situation got so out of control.

White, who was at the parking lot on Saturday with her 31-year-old boyfriend Frederic Thomas, had earlier been involved in some sort of minor car crash, which sparked the whole incident, the report says.

Continue for more details on the incident from the officers themselves and for another video.

An officer writes in the report that while the two were explaining the crash to him, a husband and wife who were in the other car approached and started explaining their side of the story. It appears that the other driver didn't see White and backed into her, the report says. No one was injured, and it seems there was no notable damage. 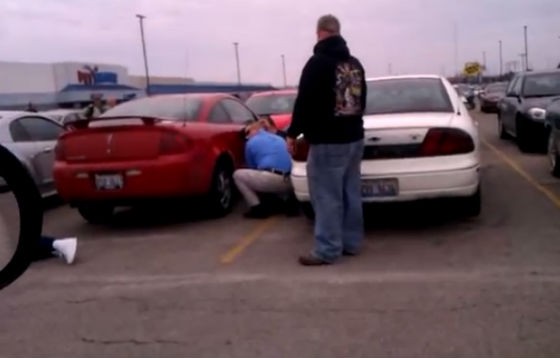 But Thomas approached the other man and called him a "lying mother fucker," the report says. He told him that he was "on some shit."

"Thomas continued with his cursing and name calling," the officer writes.

After telling him to calm down, the situation got worse, according to the report from the officer:

I told him I would have the report done very shortly. Thomas just stood there staring at me. I once again told him to go to White's car and wait. He told me White was his girlfriend and he was not going anywhere.... I told him he was interfering with my work.... He asked me - what are you going to do - arrest me? I told him if it comes to that I would.... He said - you're not going to arrest me.

Thomas, the report says, just got angrier, causing the officer to arrest him. He resisted. The officer says he was shoved to the ground and suffered an abrasion to his knee and was bleeding.

The struggle continued until another officer arrived and ended up using the Taser.

In the report, that second officer, who also says he suffered minor injuries, says of the tasing:

I instructed the female to step back but she would not.... I told White to get on the ground and she verbally refused and pulled away from my grip on her right shoulder. White continued to resist until I applied a one second drive stun with my taser to her left thigh, and was able to force her to the ground and secure her in handcuffs. Once I had secured White I observed [the other officer] had secured Thomas.

Buscher reiterates to Daily RFT that officers had the right to use a Taser in this instance, adding that, in general, Tasers are used because they reduce the "chance of injury to the public, the suspects or officers involved."

Here's a KSDK video with interviews.

And here's the full report.