*This post has been corrected from an earlier version.

The bizarre behavior of a McDonald's customer in Ballwin early this morning quickly escalated into a dramatic chase that sent an employee to the hospital and forced police to apprehend the patron.

At around 5:15 a.m., a twenty-year-old suspect snagged a cell phone of an employee who was on break charging his phone, police say. At this point, a manager at the Manchester Road restaurant reviewed surveillance footage and saw that the customer had stolen it. He eventually returned the phone, but without its battery and SIM card, according to police.

Then he took off -- and an employee ran after him.

"We don't recommend that people chase after anybody," Ballwin Police Sergeant Jim Heldmann tells Daily RFT, "especially something as insignificant as a cell-phone battery."

Heldmann tells us that the employee suddenly "realized his cell phone was missing."

"A manger looked at security tapes and quickly realized the person had taken the cell phone off the table...and the customer was still in the restaurant," he says.

They confronted the man.

"At first, he denied having it," Heldmann says.

But eventually he gave it back -- with parts missing.

"He handed over the phone...[but] shoved the employee and ran to the door. There was a little struggle," he says.

Then a third employee chased after the man on Manchester Road. She was struck by a car. 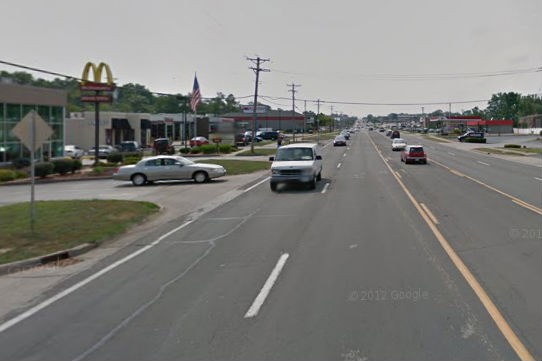 By this time police had arrived and apprehended the man, who lives in Ellisville.

He told police that he, too, was hit by the car, but police say it appeared that he did not suffer any injuries.

The employee, however, did. She was taken to the hospital with non-life-threatening injuries, Heldmann says.

The driver of the car that collided with her stayed on scene and cooperated, he adds.

"We're happy she's going to be all right," he says of the employee, but says, "We had an officer on scene.... [The chase] was completely unnecessary."

*Correction: An earlier version of this post incorrectly stated that the chase happened between vehicles, when in fact it happened on foot. The headline has been changed to reflect that.