Mayor Francis Slay on Historic Reelection: "This Was Anticlimactic" (But Might Run Again 2017)

So joked one Francis Slay supporter at the mayor's campaign headquarters last night as a modest crowd waited for the incumbent to arrive and officially declare his very unsurprising reelection victory. With little fanfare, Slay walked in around 9:15 p.m. soliciting cheers from the crowd, packed into the Grove district office, drinking wine and beer (and some whisky, too).

No St. Louis mayor has ever held four four-year terms -- and Slay, who has had the position since 2001, told reporters he could try for another term in 2017.

"I'm concentrating on four [years]. I'm not ruling out another run," he told a small group of reporters. "Some of the things, our goals, are going to take longer than four years. They're going to take five years."

In the primary election last month, Slay defeated St. Louis Board of Aldermen president Lewis Reed, his only real threat this year, paving a certain path to his historic victory last night (against a virtually nonexistent Green Party candidate). 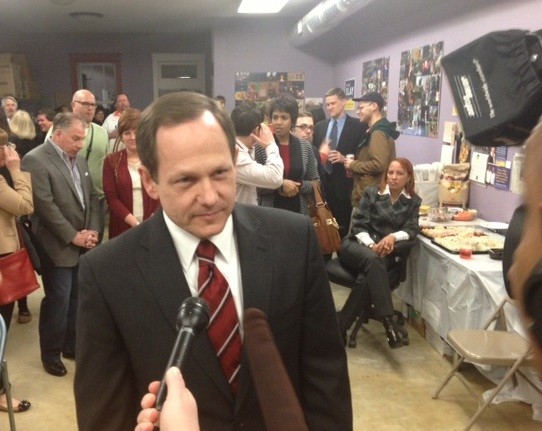 And that certainty seemed to set the tone for the low-key event, attended mostly by staffers, friends and close supporters. He's going to have a more formal victory party next month.

"I think this was anticlimactic in the sense that people felt like the big election was [past]...so there wasn't a heavy turnout, there wasn't a big motivation," the mayor said. "I can tell you this: I vote in every election, because I want to be able to complain if there's something I don't like and it's good to see more people vote, but here...people felt like it was an anticlimax situation."

Still, he said, "I'm looking forward to continuing to move this city forward. I love the people of St. Louis. I love the city, and it's just a great honor for me."

Slay does have a five-year plan, focused on the theme of "sustainability," that includes arts and culture initiatives, infrastructure goals, health improvement objectives and more.

Continue for more of Slay's comments last night and for more photos.

Reed had campaigned on the theme of "One St. Louis," trying to make the case to voters that Slay has divided the city and that St. Louis needs change. Reed has since said he will run for mayor again and yesterday announced that he'll also seek reelection in two years as aldermanic president.

For his part, Slay said he expects to have a productive relationship with Reed going forward (after a primary race that frequently devolved into petty fights).

"Lewis Reed and I worked together for many years. Recently, he decided to run for another job, and he was solidly defeated," the mayor said. "I believe that both of us are ready to get back to work for the people of St. Louis. I certainly am."

Stepping into a historic term, what does Slay think is his biggest accomplishment?

"The thing that I'm most proud of are the things we've done for our most vulnerable citizens -- whether it's the homeless, those that don't have insurance, seniors, children," he responded, later adding, "But overall, I think what we've been able to do is...create an attitude and a vision for the future that people now...believe in. They believe in a big way, in terms of what we can be as a city."