Lewis Reed is Back on Social Media, Says He'll Run Again...For Board of Aldermen President

Last month, Lewis Reed, president of the Board of Aldermen, lost his challenge to St. Louis Mayor Francis Slay -- but within minutes of his concession speech, told us that he will run for mayor again.

Part of his explanation was that he doesn't think he can effect the kind of change he wants to in the position of aldermanic president. But Reed, who has generally been quiet since his March 5 defeat, reemerged yesterday on social media with a campaign thank you video -- and some news. He will be running again for his current position.

"I want you to know I stand more committed than ever to these ideas," Reed says, "and plan to seek reelection for president of the Board of Aldermen."

Here's his short video that he posted and tweeted yesterday.

I want to thank St Louis for your support! Click here for more details and find out my next steps!!!!youtube.com/watch?v=gXzo9Y...

The announcement of his plan to run again for aldermanic president comes one day before the general election; Francis Slay is expected to officially win his historic fourth term as mayor of the city today.

But Reed, it seems, is already looking toward 2015, when he'll be running again to head the Board of Aldermen. That, in theory, could set him up for a mayoral bid in 2017. 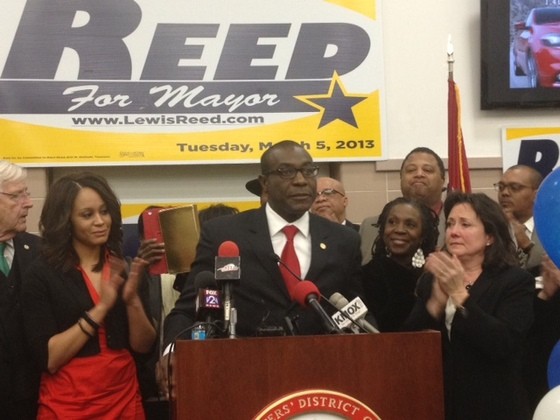 "We advanced our progressive values and beliefs," Reed says in the footage. "We elevated the debate on public policies that affect our city. We pushed the envelope. We challenged the status quo and forced the discussion on progressive values that impact each and every person within our city."

Throughout his campaign, Reed presented himself as the alternative to Slay who can better unite St. Louis and, who is -- as he says repeatedly in his new video -- more progressive.

In an interview with us on election night last month, he responded this way when asked about his intention to run for mayor again:

Absolutely, absolutely, absolutely. And the reason why is because when you look at the things that need to happen to build a stronger, safer St. Louis, you can't do them from the seat as president of the Board of Aldermen. All the resources and everything are encompassed in Room 200.

And on his relationship with Slay going forward:

If you get to the point where you're not supporting something, because of the person that's bringing it, then you need to leave office.