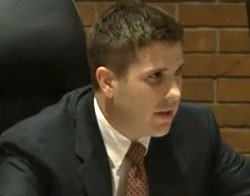 When Ellisville Mayor Adam Paul's kids google his name, he is hoping that they don't see that "dad got impeached as a mayor."

And while it may be a little tough to erase all the negative Google hits -- Paul was accused of drinking vodka on the job and cursing a lot -- the mayor and his attorneys are hoping to fight back against an effort to impeach him. A hearing on the matter will take place tonight.

After taking a lie detector test to prove that he didn't get drunk while at work, those specific charges were dropped, though the city has continued its efforts to oust him as mayor, with a wide range of allegations from disclosing confidential information to improperly requesting a gun to removing people from meetings and more. What drama can we expect tonight?

Paul's attorney defended the mayor against all accusations, outlined in our earlier coverage of the Ellisville fight. Since then, his legal team has filed a suit to block the impeachment, on view below.

That motion was denied last week, which means that the impeachment hearing is going forward tonight.

But the suit offers a glimpse at the continued fight Paul and his attorneys will bring against the various city officials going after him. And if he is successfully impeached, it's likely his attorney will file another lawsuit.

The original suit includes all sorts of accusations against his opponents -- that they purposefully intimidated him, embarrassed him, sent him mean e-mails, lied to the public about his intentions and more.

First, here's a KSDK interview with Paul in which he discusses his desire to not have his kids Google his name and see that he was impeached.

Continue for details on Adam Paul's lawsuit to block his impeachment.

Part of Paul's defense is that he is facing this opposition in large part because of his stance against Walmart tax credits. There's an election tomorrow for City Council positions and Paul has argued that they are trying to get rid of him before there are new faces on the council. (The mayor is not up for re-election and will continue on -- if he's not impeached).

In the suit to block the impeachment hearing altogether, his attorneys argued that he faced "unbridled hostility:"

The current members of the Council have demonstrated open bias and prejudice against and unbridled hostility towards Paul since he was first elected as mayor of the City to include but not be limited to:

a. Repeatedly and purposefully interrupting Paul during public meetings to embarrass him and show disdain for him;

b. Attempting to intimidate Paul...

c. Refusing to support Paul's initiatives and ideas or recognize his input, particularly on issues on which Paul successfully campaigned;

d. Telling Paul that he is not qualified to serve as mayor;

And on and on. The suit says that he has been sent insulting e-mails, including one with a clip that says "what is your major malfunction numb nuts." He alleges that one opponent revved her engine at him when he was passing by as a scare tactic.

Here's the full suit with lots more colorful details, followed by and the original City Council document that outlined the impeachment charges.

Petition for Writ of Prohibition