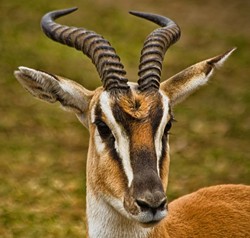 A man running from police last night apparently decided that the St. Louis Zoo was a good place to hide. It was not.

An unnamed 23-year-old male allegedly attempted to scale the fence of the zoo by the antelope enclosure last night and was finally apprehended once an officer tased him.

Earlier, police say he fled a traffic stop at Kingshighway and subsequently crashed his car on I-64.

That's when he headed for the zoo.

Daily RFT received a copy of the incident report, full account on view below, which includes details about the man's very bizarre behavior.

He was first pulled over on Kingshighway at Highway 40 around 11 p.m. last night, police say.

When officers approached him, he allegedly put his vehicle in gear and drove off. Just a few minutes later, a park ranger on duty at the roundabout in front of the zoo saw the suspect.

At this point, the man apparently started walking toward the ranger, waving his hands, and asked him "if he could help as he had wrecked his vehicle."

The ranger went with the suspect to his vehicle and nearby officers in the area who saw them approaching realized it was the car that had just sped away from the traffic stop. Once the officers started approaching them, the suspect began running north on Hampton Avenue toward the zoo.

"At the Zoo service entrance, the suspect attempted to climb over a wooden fence and while doing so threw a gun over the fence. The suspect continued running until he was apprehended," police say.

But not before there was some sort of struggle in which the man was tased once and and an officer sustained cuts, scrapes and bruises, according to police. The gun was recovered.

Warrants haven't been issued yet, but he could face charges of felony fleeing, leaving the scene of an accident, unlawful use of a weapon, resisting arrest and assaulting a law enforcement officer.

The police report doesn't have specific details on where in the zoo this took place, but KMOX reports that it was the antelope enclosure.

Incident: Felony Fleeing, Leaving Scene of Accident, UUW, Resisting Arrest, Assault 3rd on LEO Location: Wells Drive & Concourse Drive (Forest Park) Date/Time: 03-28-13 @11:19 p.m. Suspect: 23-year old male Officers pulled the suspect over on Kingshighway at Highway 40 as the license plates had several wanteds. The suspect pulled over and when the officers approached, he put his vehicle in gear and took off, onto westbound 40. Just a few minutes later, a Park Ranger was on the roundabout in front of the Zoo, at Wells and Concourse, when he was approached by the suspect walking towards him, waving his hands. The suspect asked the Park Ranger if he could help as he had wrecked his vehicle. The Park Ranger accompanied the suspect a block south on Hampton and stopped at suspect's wrecked vehicle that was in the middle of the street. Officers in the area observed the Park Ranger and suspect approaching the wrecked vehicle and realized the vehicle matched the description of the wanted vehicle that had just sped off from officers. The officers approached the Park Ranger and the suspect, and the suspect immediately ran north on Hampton towards the Zoo. At the Zoo service entrance, the suspect attempted to climb over a wooden fence and while doing so threw a gun over the fence. The suspect continued running until he was apprehended. A struggle ensued, resulting in one officer sustaining cuts and scrapes and bruises. The officer refused medical attention. The suspect was tased once, and all resistance ceased. The gun was recovered. If/when warrants are issued by the Circuit Attorney's Office, the suspect's name and booking photo will be released.