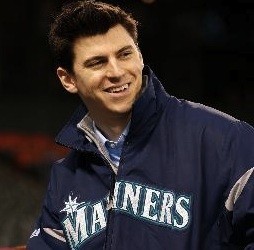 Aaron Goldsmith, who grew up in St. Louis, is the Seattle Mariners' first full-time radio announcer hire since legendary caller Dave Niehaus, who passed away at age 75 in 2010.

Goldsmith, at the young age of 29, has secured the incredibly sought-after job after six seasons of working his way through the minor-league broadcasting ranks, as outlined in-depth in a feature published this week in Seattle Weekly.

On Monday, the announcer will officially be calling games alongside Rick Rizzs, who has been at it for almost as long as Goldsmith has been alive.

How'd he get there?

The Weekly has some fun details on Goldsmith's St. Louis background:

Having grown up in St. Louis admiring the play-by-play of Jack Buck--even attending Buck's memorial service at Busch Stadium in 2002 in what he recalls as a 110-degree day--Goldsmith knows about locally treasured, iconic broadcasters. He's not here to make people forget about Niehaus--his "My, oh my"s or his "grand salami"s--but he's certainly aware there's pressure on him to perform.

And this, on his childhood and Bob Costas:

Goldsmith's mother, a retired middle-school English teacher named Bonnie Hoerner, says she was told she would never have children. Then she had a son. Following a divorce when Goldsmith was 5 she raised him as a single parent for most of his childhood. She says that she and her son forged an unusually tight bond, and Goldsmith "raised her as much as I raised him.

"He was everything, whether he wanted to be or not," she remembers.

By chance, the man Bonnie would marry when Goldsmith was eighteen, Hal Hoerner, had already formed a relationship with the future M's broadcaster years earlier -- at the Principia, the private K-12 Christian Science school Goldsmith enrolled in after moving to St. Louis when he was twelve. Hal was the dean of students, and when Goldsmith was sixteen, he helped arrange an opportunity for him to interview Costas.

As Bonnie remembers, Hal once asked her son, "Just off the cuff, 'If you could interview anyone, who would it be?'" Her son listed the renowned sports broadcaster as one of his top choices. "He knew a lot about sports, and he knew a lot about broadcasters. He knew what he liked and what he didn't like."

As luck would have it, one of Costas' kids played baseball for a school that frequently faced off against Principia. Though Hal didn't know him, Bonnie says her future husband approached Costas one day in the stands and asked if he might have time to sit down with Goldsmith. He cordially agreed.

Head over to the Weekly for the full story: In Niehaus' Seat, Calling Niehaus' Team