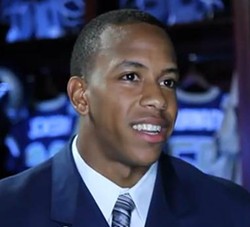 Update, 3:30 p.m: Daily RFT has received more details on the arrest from the Missoula Police Department.

The Rams Trumaine Johnson was picked up in Missoula, Montana, very early this morning for driving under the influence of alcohol.

Details are scant at this point, but according to the Missoula city jail's website, Johnson was booked at 3:05 a.m. this morning.

Johnson was a star player for the University of Montana and presumably was back in town for a visit.

A news station in Missoula broke the story and said a tweet from Johnson confirmed he was in town visiting. That tweet now seems to be missing.

Police records confirm the arrest. Johnson made bail about an hour after he was booked and left after paying the $700 bond. He is back in Missouri.

Here's the Rams very brief response so far: "We are aware of the situation regarding Trumaine Johnson. We are gathering more information and will have no further comment at this time."

Update, 3:30 p.m: Missoula Police Department Sergeant Travis Welsh tells us that Johnson was pulled over just after 2 a.m. this morning for not having his headlights on after dark. Welsh says that although Johnson was cooperative throughout the stop, he refused a breath test and was put through field sobriety tests instead. Welsh wouldn't go into detail about Johnson's behavior or his performance on the sobriety tasks but says that the arresting officer saw enough to arrest and charge Johnson with a DUI.