Photo: Wolf Wandering Missouri Shot Dead By Hunter Who Thinks It's a Coyote

What are you more afraid of, a coyote wandering around Missouri -- or a wolf?

In this case, it doesn't really matter, because the animal on the loose was killed by a hunter, says the Missouri Department of Conservation. The canine in question, new analysis shows, was in fact a wolf, though the hunter who killed the animal thought it was a coyote. Classic case of mistaken identity, officials say.

Either way we are safe from the animal that apparently wandered here from out of state.

But with wolf sightings typically very rare in Missouri, should we be worried?

As with the elk-eating mountain lion last month, probably not!

The conservation department in its press release says:

Also known as timber wolves, gray wolves once inhabited northern Missouri but were gone from the state by the late 1800s due to hunting and habitat loss.

[MDC Resource Scientist and Furbearer Biologist Jeff] Beringer said that there is no evidence of a breeding population in the state, but wolves occasionally wander into Missouri from northern states. He added that MDC has never stocked wolves and has no plans to restore this once-native species.

The wolf in this case was shot and killed last year by a hunter in Howard County -- who apparently thought it was a coyote -- but this week, officials have new results about its identity. Tissue samples from the 81-pound male animal were sent to the U.S. Fish and Wildlife Service for genetic testing and recently received DNA test results offer some new details. 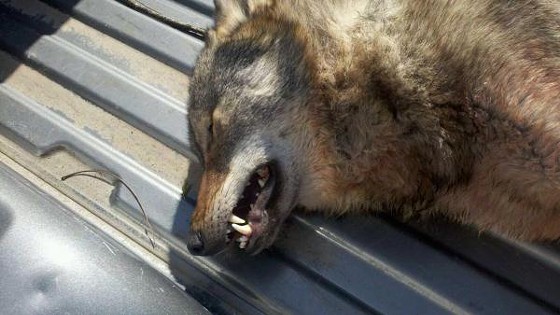 The animal, the department says, was a gray wolf from the Great Lakes states of Minnesota, Wisconsin or Michigan. There are no signs like ear tags or tattoos that it was a captive animal.

And in case you were wondering about the risks, here's how the department describes gray wolves' relationship to humans:

Wolves have been hated and feared -- and admired and respected -- by humans for millennia. They symbolize wilderness, freedom and loyalty. Their reintroduction in the West remains contentious among many.