Should employers and insurers in Missouri be allowed to deny coverage of birth control if it violates their religious beliefs? A federal judge, as we reported earlier this week, ruled that they cannot be exempt -- in a decision overturning a Missouri law that directly contradicted President Barack Obama's federal policy for mandatory coverage.

But House Speaker Tim Jones says the debate is not over. The Republican representative sent a letter yesterday urging the attorney general's office to appeal the decision, arguing that this is a matter of free speech.

"The First Amendment trumps the overreach of Obamacare and its mandates," Jones writes in the letter, on full view below.

Is this a lost cause for Jones -- or will the legal battle wage on?

It's up to the office of Attorney General Chris Koster, a Democrat, who could appeal the ruling that has invalidated the GOP-backed law. His office told us earlier this week that it was reviewing the decision, and it appears that as of yesterday, it's still uncertain if Koster will appeal.

The law in question -- which was vetoed by Governor Jay Nixon, but passed anyway when the legislature overturned the veto -- established religious and moral exemptions for birth control coverage in the state. But the federal decision, which did not weigh in on the actual merits of mandatory coverage, said that it is unconstitutional for Missouri to have a law that directly violates federal law.

Jones says in his letter to Koster:

Not only does the federal government lack the authority to mandate that a business provide a commodity at no cost, it is also a simple matter of fact that insurance companies will not take a penalty to their profits to comply with this portion of the federal healthcare law. Instead, they will pass the cost along to their customers, meaning that those organizations which object to paying for abortion-inducing drugs will still be paying the cost of coverage; it just will not be itemized on their bills....

By filing an appeal on behalf of our state and arguing against the constitutionality of the contraception mandate, you can help to protect our right to religious freedom from being interfered with by a federal government which has clearly overreached its constitutional authority.

Continue for more on the birth control fight and for the full letter.

Jones' renewed push against Obama's health care measures comes as the speaker is promoting his legislation in the House that would give doctors the right not to perform procedures, such as abortions, that go against their moral beliefs. That bill has sparked controversy with questions of how it could impact rape victims seeking emergency contraception.

In a press release announcing his letter to Koster, Jones' office notes that the effort to override Nixon's veto on this law was one of his first actions as speaker of the House. 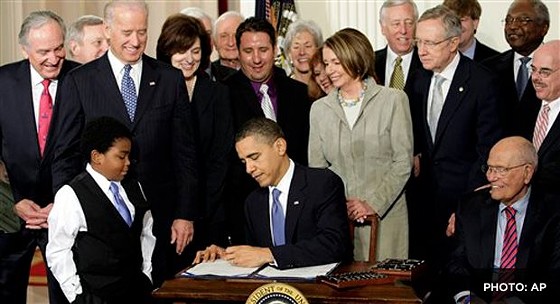 And in his letter, he says the veto is a major source of pride: "It was an honor and privilege to play an important role in pass this necessary protection of our First Amendment rights into law, and it is my hope that in the coming months this protection will once again be restored."

Here's his full press release, followed by the letter and the federal ruling.

Speaker Tim Jones has released the following statement regarding Obama-appointed Judge Audrey G. Fleissig's decision to invalidate the provisions of SB749, a 2012 bill protecting Missourians' religious beliefs from being interfered with by provisions of the federal healthcare law which requires provision of services like abortion, contraception, or sterilization.

"Missourians' religious rights under the First Amendment must take precedence over President Obama's overreaching health care law. I call on Attorney General Koster to immediately appeal this case and to defend the rights of Missouri citizens by challenging the contraception mandate as unconstitutional. Missourians need to be protected from mandates that violate their religious beliefs," said Speaker Jones.

The veto override of SB749 was among Speaker Jones' first actions as Speaker of the Missouri House. A letter from Speaker Jones to Attorney General Koster requesting the appeal is available here.

Just last week, the founder of Domino's Pizza won his bid for a court order to prevent enforcement of the Health and Human Services mandate that forces employers to purchase drugs that cause abortion, in violation of their religious beliefs. The lawsuit in that case is still pending.