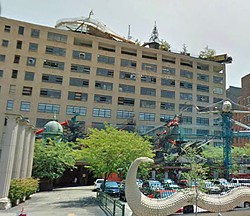 City Museum clears millions of dollars in profits each year, according to financials made public this month in a protracted legal battle that has pitted City Museum founder Bob Cassilly's widow, Giovanna, against her husband's former business partner, David Jump.

In the lawsuit's latest skirmish this month, a St. Louis judge blocked Jump's attempt to seize control of the downtown attraction and the old shoe factory that houses it, International Building Co., from Giovanna and other members of Cassilly's estate.

Prior to his death in a freak bulldozer accident, Cassilly was a 50/50 partner in City Museum and IBC with Jump. Now Cassilly's estate, which includes Giovanna and her two children as well as Bob's two adult children from an earlier marriage, is an equal partner in the two companies. And it's been a rocky partnership since the get-go.

Two months after Cassilly's death, Giovanna complained in court that Jump had changed the locks at City Museum to bar her access to property and company financials she's entitled to review as personal representative of her husband's estate. She's also accused Jump of withholding profits from City Museum and IBC that have made it impossible to settle her deceased husband's estate.

This month Jump at last shared those profits, but they came with a catch.

According to court filings, on March 8 Jump distributed $8.2 million in profits from City Museum and IBC to Cassilly's estate and to himself, for a total of $4.1 million per partner. He then required that both he and the estate reinvest $4.1 million ($2,050,000 per partner) back into the businesses by March 22. In addition, Jump stated that he would then invest another $4.1 million in the City Museum and IBC through his river-barge business, American Milling, or other investors.

If Cassilly's estate reinvested the minimum amount of $2,050,000, it would maintain a 25 percent ownership stake in City Museum and IBC. If it reinvested no money by the deadline, its stake in the combined companies would be reduced to zero.

William Wunderlich, an attorney for the estate, fired back three days later with a motion to block Jump from going through with the plan. In his plea to the court, Wunderlich called the deadline and reinvestment demands "capricious" and "arbitrary" and impossible for the estate to meet in such a short time given the complexities of probate. The real intent of Jump's scheme, wrote Wunderlich, was to allow him "to confiscate valuable assets of the the estate...without just compensation and without approval from the probate court."

For the time being, the court has agreed. On March 13, St. Louis Circuit Court Judge Robert Dierker issued a temporary restraining order prohibiting Jump from "taking any action whatsoever which would result in the dilution of the ownership interests of said estate." Dierker has also scheduled a hearing for April 1 to consider the estate's request to a review financials for City Museum and IBC.

Last year another St. Louis judge ruled that Jump did not have to disclose City Museum's or IBC's accounting information to the estate. But in its argument for the restraining order this month, Giovanna and the estate's attorney maintain that that information is crucial in order for the estate to file its income tax return and consider whether it should reinvest in City Museum and IBC as Jump has demanded.

According to the estate, Jump's attorneys handed over K-1 federal tax forms this month showing that in 2012 alone the estate's cut of profits from the businesses amounted to $2.2 million from City Museum and another $413,000 from IBC. (Double those figures to include Jump's take from the businesses, and you get a good idea about just how lucrative the two entities have become.) But the estate argues that it has no way of verifying if those profits are accurate without access to City Museum's books.

Prior to this month's payment, Jump had not distributed profits to Cassilly's estate since October 2011 when the estate received two checks -- one for $80,000 and another for $200,000.

Jump's attorney, Paul Puricelli, tells Daily RFT that the $8.2 million recently pulled out of City Museum and IBC represents income over the past year and a half. He adds that Jump's desire to reinvest some of those funds back into the company is fair, especially since his client never wished to disburse income to himself or the estate in the first place.

"What makes it difficult is a partner who wants every penny of profit from the company and then complains when you give them what they asked for," says Puricelli.

Wunderlich, the attorney for the estate, could not be reached for comment. But in court documents he suggests Jump is trying to low-ball the estate. City Museum is worth at least $11 million, according to the estate, and IBC is worth around another $7 million.