In a victory for First Amendment supporters -- and white supremacists -- a federal judge ruled yesterday that a St. Francois County city cannot prohibit the Ku Klux Klan from distributing leaflets on city streets.

The decision isn't all that surprising. The courts have ruled in favor of the Traditionalist American Knights of the KKK in past Missouri disputes around the group's flyering campaigns. And the decision in this American Civil Liberties Union of Eastern Missouri lawsuit relates to an ordinance in the city of Desloge that could have also potentially impacted scouts, Little League baseball teams and firefighters.

What's the judge's reasoning? Continue for details on the decision -- and our collection of some of the KKK Missouri fliers this decision protects.

"Broad ordinances restricting speech allow government officials to call for enforcement only when they disagree with a particular message," Tony Rothert, the ACLU-EM's legal director, says in a statement. "In the United States, the government cannot pick and choose what should or should not be communicated. Any attempt to silence unpopular voices through legislation is an attack on the free speech rights we are all guaranteed by the First Amendment."

The decision from U.S. District Judge Audrey Fleissig makes a preliminary injunction from December permanent -- meaning the city of Desloge cannot enforce the ordinance in question. The suit brought forth by the ACLU in November on behalf of Frank Ancona and members of the KKK targeted a city policy that restricted solicitation.

The ACLU says that after the city defended its broad restriction on the distribution of handbills, the KKK decided to challenge the rule on free-speech grounds.

And, it seems, it was successful. The short decision, full statement on view below, says that the city is barred from enforcing or threatening to enforce the rule, citing the Constitution.

The KKK had planned on distributing leaflets in Desloge until the group learned that this would be a violation, the ACLU says.

So what kinds of fliers does this decision permit?

For your reading pleasure/horror this morning, we've reassembled here some of the top alarmist KKK fliers of Missouri that we collected back in October, when there was a ruling in a similar case in Cape Girardeau. Viewer discretion is advised! 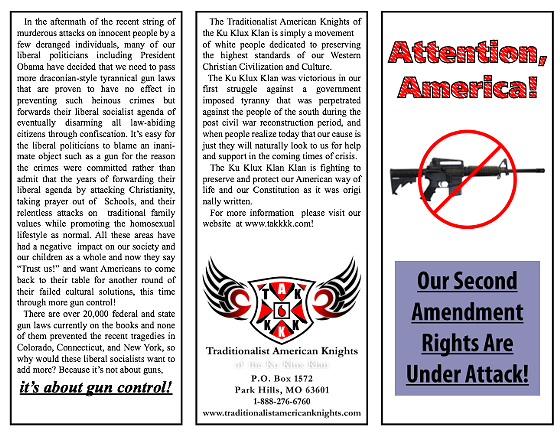 And here's the full decision.