Despite the fact both men have sued each other, King recently offered Coyne the opportunity to fight another undefeated light heavyweight, Marcus Oliveira. Call it luck of the Irish?

"The fight is a done deal, as much as it can be all things considered," Coyne wrote Daily RFT over the weekend, "but again King is screwing around with the show and everybody involved."

King's ability (or lack thereof) to put together fights is at the heart of Coyne's lawsuit. Coyne says his career was left to wither on the vine for over a year. Once his three-year contract with Don King Productions expired, Coyne was almost immediately offered the chance to fight for a world title. King sent in his lawyers to make sure the deal fell apart, claiming Coyne is still under contract with him. Read the whole saga here.

The story ends with Coyne in greater limbo than ever. King offered the Oliveira fight for March 9, and after carefully editing the contract with his lawyer, Coyne signed. But on his first day of sparring, Coyne received a deep cut over his eye. Waiting for the gash to heal robbed him of ten days of training, once again putting the kibosh on a career-building fight. Because of their fraught relationship, Coyne was dubious King would reschedule. 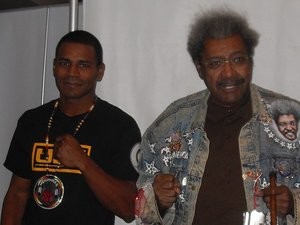 It appears, however, that the matchup is now slated for April 12. There are plenty of details up in the air though, writes an exasperated Coyne.

We're less than 30 days away from the date and this worthless turd doesn't even have a venue for it. A) This guarantees more lack of exposure for the fighters involved B) a shitty gate C) Zero promotion D) Another event that loses money because of DKP's incompetence.

I know for a fact that he's once again, and potentially for the last time, driven the president of Showtime Sports to his wits end.

After seeing three significant fights -- two of them world title shots -- slip through his fingers, Coyne can be forgiven for being skeptical. But assuming it does go forward, some are already saying he and Oliveira are a good match. Oliveira hails from Lawrence, Kansas, is undefeated (24-0), and just as hungry as Coyne for a title shot (he's also a King boxer). Whoever comes out on top will automatically get the chance to fight for the WBA light heavyweight title against its current holder, Beibut Shumenov of Kazakhstan.

And Coyne says he won't let his doubts about King get in the way of training.

"I have to be ready to come out guns blazing regardless."