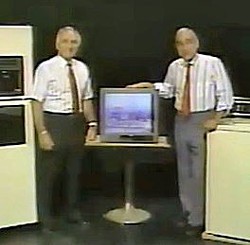 Updated with comment from Tony Slyman of Appliance Discounters.

Slyman. The name has been synonymous with household appliances in St. Louis ever since brothers Bob and Harry Slyman aired a commercial of themselves seated on top of the Gateway Arch.

"Thanks for making us tops in town," the jovial brothers crowed in the 1972 advertisement that took liberal use of the then cutting-edge, green-screen technology.

Four decades later the Slyman Brothers appliance stores continue to operate with three St. Louis locations, though the family-owned business recently got some unexpected competition from within its own clan.

In a lawsuit filed this year in St. Louis Circuit Court, Slyman Brothers alleges that the local chain Appliance Discounters is infringing on its trademark by using the name Slyman in advertisements and store signage.

Appliance Discounters opened in 2009 and, according to its website, now has locations in Webster Groves, St. Charles, Ballwin and Arnold. Its owners are Anthony Slyman and his sister, Denise Bradley. Both are children of Slyman Brothers' founder, Bob Slyman, and worked for the family business prior to venturing out on their own.

In the lawsuit, Slyman Brothers accuses Appliance Discounters of affiliating itself with "Slyman Brothers" in radio advertisements and its website and using the name Slyman in other marketing.

Per the petition: "Plaintiffs receive regular and repeated contacts from the relevant purchasing public depicting the confusion created by the references and uses defendant has made of the Slyman trademarks, directly inquiring into the affiliation or relationship between Slyman Brothers and Appliance Discounters, believing that Slyman Brothers has opened a new 'discount' store."

The suit seeks a permanent injunction that would prohibit Appliance Discounters from advertising, associating or referencing the term Slyman or Slyman Brothers.

In a statement e-mailed to Daily RFT, the plaintiffs state:

"Slyman Brothers has been in business for more than 45 years, and we have worked very hard to establish our business name, our reputation, and our client base. Our family has made many sacrifices to get to where we are now. We only want to protect our clients and our business. The name "Slyman" is associated with great appliances, great customer service, and Slyman Brothers Appliances. We are proud of our business, and do not want our customers to be confused any longer about who they are buying appliances from."

Appliance Discounters declined comment to Daily RFT and has yet to respond in court to the initial complaint. However, it appears the company has removed mention of Slyman Brothers from its website, as mentioned in the lawsuit.

Update: Tony Slyman reached out to Riverfront Times a few days after this article was published to clear up what he thought was a confusing headline and to tell his side of the story. Below is his response in its entirety:

For the record, Appliance Discounters is not suing Slyman Brothers as reported earlier in the RFT nor has any intention of doing so. We find it shameful and embarrassing that any brother and sister would do so to one another. In reference to the so-called trademark infringements Slyman Brothers is referring to, it is me Tony Slyman using my personal name in ads and on the front door of my business. We have never used Slyman Brothers in any ads. We also post my sister's name, Denise Bradley, proudly in our ads and on our front door. Denise and I both feel blessed that our business has grown from two to thirty employees and is the fastest growing independent appliance retailer in the Midwest. We once stated in our bio on our website that we once co-owned Slyman Brothers which is true. It was removed long before the lawsuit when we changed our website. We feel there is plenty of business in St. Louis for all to prosper and are happy for their success. We only wish they felt the same for us. After speaking with our parents, Robert and Jerry Slyman who are the original owners of Slyman Brothers, they are adamantly against this baseless lawsuit and are upset that it has made its way to the media. It also states on Slyman Brothers website that my brothers and sister bought Slyman Brothers from our father. The fact is it was given to all five of us that were involved in the family business. My sister Denise and I gave back our stock at no cost when we broke off to go our own way. Respectfully, Tony Slyman

Continue on to view television ads from Appliance Discounter (mentioning the owners' names) as well as some classic Slyman Brothers' commercials.

Below is an ad that clearly identifies Appliance Discounter co-owner Anthony Slyman:

A recent Slyman Brothers' spot that plays up the company's family focus:

An early Slyman Brothers ad that pays tribute to their well-known Arch commercial: