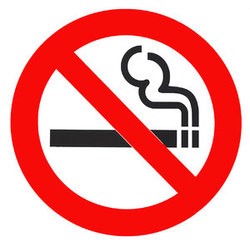 In St. Louis County, elected officials and business owners have been fighting over a proposal to ban smoking inside most establishments -- even ones that were previously exempt.

But across the river in Illinois, St. Clair County is successfully pushing forward with a different kind of smoking policy and one that officials say will likely be the start of a trend: a ban on smoking inside public housing complexes.

"This is all about health and wellness," Jan Douglass, community health program coordinator for the county, tells Daily RFT. "St. Clair County is trying to become one of the healthiest counties...and we are looking at the health and safety of all residents."

Where will the new ban apply?

The county will officially make three different federally assisted public housing units smoke-free starting in July -- though Douglass says she expects them to expand the smoking ban once they've tested it out in these locations.

The three units together have close to 120 residents and are housing complexes designated for the elderly. Two are in Belleville and a third is in Centreville. Douglass says they are already in the process of considering a fourth complex which has around 80 residents.

"This is a national directive coming down from the [U.S. Department of Housing and Urban Development]," she explains. "You are going to see this trend happening."

Douglass, a coordinator with the county's health department, says that in her latest survey of the fourth complex under consideration, 54 percent of residents said they favored a ban and 28 percent said they have no preference.

"That's a pretty strong mandate," she says. "Only two people have said no way."

Continue for more details on the smoking ban and a copy of the survey sent to residents.

Douglass says that these kinds of policies are aimed at reducing negative impacts from secondhand smoke.

"This is not telling people you can't smoke. You can smoke. We just don't want you to smoke inside the apartment or in common areas," says Douglass, adding, "You don't have to be a smoker to be affected by secondhand smoke."

The county decided to start with units that house the elderly because there are increased health risks there as well as greater potential for fires with more residents using oxygen tanks.

Douglass says the county will be introducing this slowly "so we can educate the residents."

And in the survey to residents, on view below, officials also give smokers the opportunity to seek support in the process of quitting.

"If you need help quitting, let us try and help you," she says.