For four months, East St. Louis firefighter Robert Schield strapped a camera to himself while on the job, capturing all sorts of dramatic footage of fires and rescues.

"It lets viewers see what it's like to wear the helmet of an East St. Louis firefighter," Schield tells Daily RFT. "Maybe it could help."

The footage, professionally edited in an intense video on view below, is about more than just giving people a glimpse of life at the department. It's also aimed at raising awareness around a large round of layoffs that could happen in the coming months that the union and firefighters say could put the remaining employees -- and residents of East St. Louis -- at great risk.

Here's the nine-minute video titled East St. Louis Firefighters Struggle, which was posted on Monday and already has more than 25,000 views.

Brandon Walls, president of the East St. Louis Firefighters IAFF 23, the local union, says that with looming budget cuts, a department of only 53 will be losing 22 firefighters to layoffs. There used to be more than 150 -- and now the department could be down to 31 as early as May.

"It's gonna create a great strain on the few remaining," says Walls, a captain for nearly sixteen years. "Safety is our biggest issue -- not just with the city, but with us."

A video seemed like a good way to make it clear just how challenging their work is -- and how important it is that they don't face more layoffs or more firehouse closures.

"We are just trying to get somebody to get our back and help us," he says. "Visuals is always the best way.... It's always different when they can actually see." 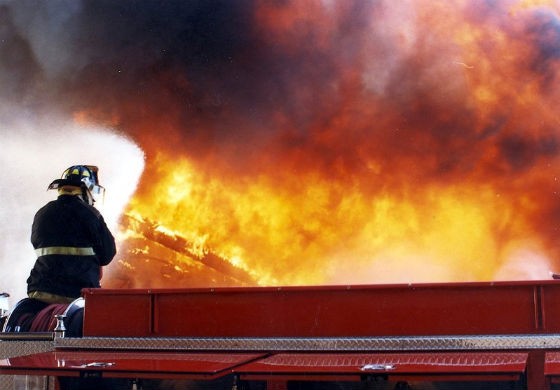 Continue for more on the layoffs and for more photos.

The layoffs, Walls says, haven't been formally announced, but that they are a part of a recently approved budget. The city manager for East St. Louis did not return a call from Daily RFT yesterday; an assistant chief with the fire department tells us that fire officials approved of the release of this video.

Schield, who shot and edited it, owns a business called Fire Cam -- and tells us that these cameras are used all over the country for training, critiquing responses, arson investigations and more. The high-definition camera technology is resistant to extreme heat.

"These potential layoffs may cut our department in half," Schield says. "It's so unacceptable."