Pope Francis I: Survivors Network of Those Abused By Priests Say He's Not One of "Dirty Dozen" 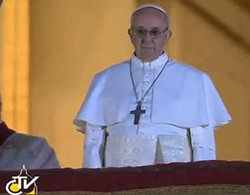 Yesterday afternoon, the chimney on the roof of the Sistine Chapel in Rome billowed white smoke, and the new pope emerged on the balcony in white robes: Cardinal Jorge Mario Bergoglio of Buenos Aires. His papal name will be Francis I.

David Clohessy, the executive director of Survivors Network of Those Abused by Priests, is currently in Rome observing the conclave. In the weeks leading up to yesterday's decision, the group has been very vocal about who they did not want to see become the new pontiff, their so-called "Dirty Dozen." The list included St. Louis native Cardinal Timothy Dolan.

Daily RFT reached Clohessy by e-mail to ask: What is SNAP's position on Pope Francis?

SNAP's "Dirty Dozen" were cardinals who, at the very least, expressed defensiveness in the media about child sex abuse scandals and at the worst allegedly participated in cover-ups. Read the full list here. The group also called for certain cardinals to be barred from the conclave for their roles in covering for pedophile priests -- something the Vatican called the result of "negative prejudice."

Clohessy responded to our request with a statement, which seems to indicate the group is relieved by the choice, but believes that more information is needed (emphasis ours):

We've long worried about child sex crimes and cover ups by religious order clerics like the Jesuits. Religious orders have often been worse than bishops at hiding predators.

The Jesuits, in particular, have a troubled track record on children's safety.

So we're struck by how this new pope, coming from a religious order, has both an enormous opportunity and duty to help prevent heinous assaults against kids by this crucial and relatively secretive segment of the Catholic clergy.

We're grateful the new pope isn't on our "Dirty Dozen" list. But very little about this crisis has been exposed in South and Central America. We worry about the safety of children in the church there. And we hope victims, witnesses and whistleblowers in Argentina will find the courage to step forward and disclose how they have been and are being treated in the new pope's home archdiocese.

We suspect that supporters of the new pope will find and cite one seemingly positive step he's made in an abuse case. One such incident, however encouraging it may initially seem, doesn't necessarily show a pattern. It's important that we judge his record on abuse and coverup by all of his actions, not one isolated one.

An Argentinian archbishop, Edgardo Gabriel Storni, of Santa Fe, was convicted and sentenced to prison because of sexual abuse. We hope Pope Francis learned the right lessons observing that case.

We are grateful he doesn't work in the Vatican and isn't a member of the Curia. We hope that will give him the courage to shake things up and put the prevention of abuse and cover up first on his priority list. For the safety of kids and the healing of victims, we hope he starts by exposing the names of predator priests - current and former, living and deceased - in his home archdiocese.