Mizzou Student Surprised to Find Herself the Face of Webster University 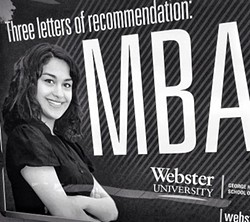 The face of Webster University's MBA program appears so happy and self-assured in the ads displayed at Lambert-St. Louis International Airport. There she is, smiling confidently at the camera, her arms crossed boldly in front of her. Her gleaming image almost makes you want to join her and the other future business executives studying at Webster's leafy campus in suburban St. Louis.

The only problem with that?

To find the woman in the ad you'd have to travel 120 miles west to the University of Missouri where Kholood Eid is pursuing a graduate degree in journalism and, until a friend passing through the airport sent her a text last month, had no idea her likeness was being used to sell Webster University. Since then, other friends have passed along photos of the ad via text messages and social media.

"It's just weird," says Eid. "You'd think that they'd inform me before using my photo. That and I never pursued an MBA from Webster University."

Eid did, however, receive her undergraduate degree from Webster and recalls being photographed prior to her graduation in May 2010. Her understanding was that the photo was to hang in the school's communications building along with pictures of other honor students within the department. She does not remember signing a release for the photo.

The release states that Webster University may use the picture for any and all exhibitions, public display, publications, commercial art, Internet/Web and advertising related to student recruitment and any other university promotional activities without limitation or reservation.

Still, shouldn't the school have notified Eid that it was going to use her image to advertise its MBA program? And doesn't it have any actual MBA students that could appear in the poster? (Edit note: It's probably worth mentioning here that Eid worked as a part-time layout editor and contributor for Riverfront Times from 2010 to 2012. Also, the author of this article once worked with Susan Kerth at another newspaper. So, yeah, conflicts of interest on both sides.)

"We use images of students and former students for all sorts of purposes as the photo release allows," says Kerth. "[Eid's photo] was just a really nice image."

Eid, whose parents hail from Palestine, has another theory: "They just wanted an ethnically ambiguous face."

And she says it's not the first time she has felt used by the university. Shortly after graduation, she says, the university asked her for a quote about her experience as a student. She says she was told it was for a newsletter for alumni. Later, she says, she found out the quote was used as part of a fundraising campaign.

Eid adds that while she enjoyed her time at Webster, she has since soured on the institution after the school "handed me a bill instead of my diploma on graduation day" and then turned her over to a collection agency.

"I enrolled at Webster to be a student, not their poster child," she says.

So, perhaps the university could help her out now by paying her to serve as its official model?

Eh, not exactly. The same release Eid signed three years ago also protects the university from paying her any compensation.

Though Eid won't have to concern herself with the ad at the airport much longer.

"We are taking it down and will replace it with another," Kerth tells Daily RFT.