We've gotten a lot of response over the last week to our "St. Louis Rules, Kansas City Drools" post -- RFT's rebuttal to a Kansas City Star column arguing that Kansas City is superior to St. Louis and that our city is declining while their city is rising.

In case you missed it, check out our response to KC Star columnist Yael T. Abouhalkah.

And for your reading pleasure below, we've chosen our top favorite responses from readers, many with their own suggestions about why Kansas City or St. Louis is more or less of a sucky city.

15. We Are Both the Joke of the Nation A string of replies Daily RFT received were along the lines of xxxxxxxxx's comment:

Hahaha! Is this really a debate?? So sad...I'll help out. Both cities are amongst the biggest jokes in the nation. People all end up or get stuck in both. NO ONE picks either. Ever.

This is like two retards arguing over who is less retarded. Just sit quietly in your short bus and don't disturb the others...

14. Kansas City and St. Louis Are Filled With Angry People Reader kane8090 had this addition to the we-both-suck argument:

Been to both lived in both and they both are hot beds for crime, drugs and angry people. They are a stain on the map that is the mid west and to be truthful no one if they had a choice of anywhere in america to live would pick either of these cities unless they are high on meth( which is very possible in the two)

13. Kansas City Inferiority Complex Speaks for Itself From Luke:

Equally as funny as this article, is the collective Kansas City inferiority complex that has come to life in these comments.

12. If They Hated Kansas City So Much, They'd Move to Denver! In response to our argument that those in Kansas City didn't really want to end up there, reader wjs249 writes:

I don't know where you even got this. People in KC love their city. Denver is a mere 8 hour drive, they could go there if they wanted. Personally, you couldn't pay me to live in California.

11. Jefferson City is the Real Enemy Many readers argue that we should work together instead of trash talk each other (though where's the fun in that?) and reader Robert argues we have a common enemy where we should direct our negative energy:

The stats in the KC star article are terribly misleading, and that entire column is really disingenuous. That said this blog piece is immature and dumb. Both cities are fine. Each should unite its efforts more against the common enemy, which is Jefferson City, where bumfuck MO is overrepresented and anti-big city legislation is passed too often, while pro-big city legislation is stifled. Nevermind that STL and KC are the economic engines of the entire state.

10. St. Louis' Population Isn't Really Declining In response to the KC Star argument that St. Louis is in a downfall due to a population decline, reader collins79 writes:

Actually the population numbers at noted in the KC Star is a terrible comparison considering KC has much larger city limits which encompass the suburbs and even rural areas. STL on the other hand is an independent city which cannot annex additional land (i.e. the county) to inflate the city population numbers like KC. The people who have moved out of St. Louis City have moved to St. Louis County. To compare apples to apples you have to look at it as if St. Louis City is part of St. Louis County, which would make St. Louis one of the top 10 biggest cities in the country. Obviously Yael didn't do any research on the subject and comes across looking foolish. Unfortunately most people like yourself tend to believe what he wrote even if it is very uninformed.

9. Kansas City Is Kind of Slow Reader Phil says he is not a huge fan of name-calling but has this to say about the KC v. STL debate:

I am from KC, and have lived in STL for almost 2 years now, and I can tell you that both cities have their bright spots, which the other city can not touch. Stl is a more vibrant flowing city with a lot to see and do where KC is quite a bit slower. The pizza in Stl is far superior to most of KC's but that comment about the Weak ass BBQ the article pointed out. - That author should be stoned. KC and Memphis BBQ is some of the best in the US. 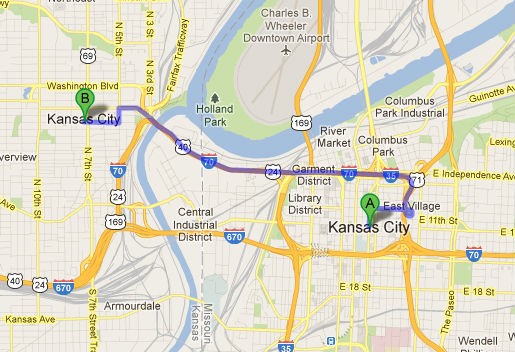 8. Can We All Aim a Little Higher? Chicago is pretty cool, says Todd:

I don't think either city should really compare itself to the other - I mean, can we aim a little higher? Kansas City for some reason has an inferiority complex (like STL does with Chicago) and I'm not sure where that comes from. I live in STL, love it, and have visited KC - not a bad place....but neither is really significantly better than the other.

7. There's Probably No St. Louis Anywhere Else In the Country Chris may not have done any research, but he still has this conclusion to offer:

We simply have an air of awesome here that KC can't compare to. Besides..... There's two Kansas Citys.... Not very original. Whereas there only one St. Louis in the whole country. (No research was done to support this claim)

6. St. Louis County is Nice Reader Steve didn't have much to say, but in response to the KC v. STL question, sounds like he's choosing the latter -- the county, that is:

Not pleased with our one compliment to Kansas City, reader CVSD offers this reply.

It is true that KC has a plethora of excellent Mexican food, but Rudy's is not an example - check out KCK, Old Northeast, SW Blvd, etc. - lots of truly "authentic" and great stuff, like eight different "Cherokee Streets" worth of Mexican eats. Also interesting that you cite Minsky's on 39th, which was a rogue Minsky's that did not use the same products as the other locations and recently closed. It is true KC is not a "pizza town," but at least we have the good sense not to use Provel.

4. St. Louisans Are Delusional Number one evidence, according to RutherfordVanGleason? Pizza:

All you need to know about the delusion of awesomeness that St. Louisans seem to live under is St. Louis style pizza. That pile of garbage is an affront to any homeless person who would gladly gut you for a slice of Dominos. Yet, you ask someone from St. Louis and he or she will tell you it's the best. Terrible.

3. St. Louis Was Better, But That's All History

MoRage says Kansas City wins, but St. Louis has one thing going for it -- it's past:

We can't fight how great your city once was but for what it is now? Please.

Yes, we have our problems in Kansas City, sure, but we'll take--and keep--it, thanks. Let's not get into a further pissing match about the two cities. You have far more history, naturally, and the Cardinals will always beat the Royals but let's get over it.

2. Go To Paris The West Coast, Europe, New York City -- and many other cool places in the world might offer some perspective, says reader MOinNYC, who offers us a bit of his life story:

I spent the first 18 years of my life in Kansas City and the next seven in St. Louis. The remaining 30 years have taken me to the West Coast, Europe and NYC. Since I left Missouri, the competitive bickering between its two major cosmopolitan areas has grown to seem more and more like a tempest in a teapot. The sassier it gets, the smaller it seems. I want to say to those still arguing, "You gotta' get out more! Visit San Francisco, NYC, Paris, even Chicago or Seattle, and then come back and look for the substantial differences between KC and St. Louis." Stop and look at how both cities fall short of whatever cities the really aspire to emulate. Every city, even the best, falls short of some aspirant. Being willing to drop the combative, prejudicial side of civic pride long enough to recognize where you could improve can effect way more positive change, which is what I can't help but wish for both of these cities I've called home.

1. If You Judge a City By Its Commenters... We all lose. Says onedeadkennedy:

You can tell how equally useless both are by reading the comments, I'm just hoping I don't get stuck in KC on my way to Colorado. XD