Photos: Missouri Golfer Swallowed By Illinois Sinkhole, Says "I Was Falling for a Long Time" 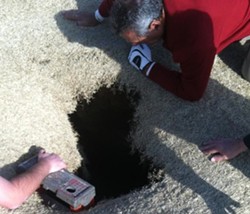 A Missouri golfer was swallowed by a sinkhole in Waterloo, Illinois -- and survived to tell the tale.

Mark Mihal, a Creve Coeur mortgage broker who runs a website called golfmanna.com, is now getting inundated with requests for interviews, one of his colleagues tells Daily RFT. Golfmanna sent us photos, on view below, of the sinkhole that apparently pulled him under.

"I felt the ground start to collapse, and it happened so fast that I couldn't do anything," Mark says on his website. "I reached for the ground as I was going down and it gave way, too. It seemed like I was falling for a long time. The real scary part was I didn't know when I would hit bottom and what I would land on."

How'd he get out?

A detailed account, written by his wife Lori, says that Mihal was golfing in Waterloo last Friday with three others -- who at first didn't even realize the golfer had been swallowed.

"Mike [his golfing partner] had his back to Mark and when he turned to say something to him, Mark was gone," she writes. "Mike could hear Mark moaning and ran in the direction where he had been standing just a few seconds earlier. It was immediately clear what had happened; the ground had caved in and Mark had fallen into the earth -- 18 feet underground."

Her husband has always been claustrophobic, she adds. So he quickly began to panic and was also in shock -- and was experiencing excruciating pain. The clubhouse brought a twelve-foot ladder, but Mihal was another six feet below and had dislocated his shoulder. She writes of his rescue:

Ed gave a whole new meaning to "golfing buddy," as he volunteered to go down in the hole and tie a rope around Mark and hoist him up to the ladder so they could get him out. When Ed reached the bottom of the hole, he took off his sweatshirt and made a sling for Mark's very noticeable shoulder injury. After approximately 20 minutes underground, they were able to get Mark out and into an ambulance.

And they had recently watched a news clip on the Florida man who was swallowed by a sinkhole right from his bedroom.

"The thoughts of being buried alive were running through Mark's mind because of that horrifying story," she says. "Dirt was falling on his head the whole time he was down below; his friends and the golf club staff knew that timing was everything and wanted to get him out as soon as possible."

The Post-Dispatch says that this was the first time in the twenty-year-history of Annbriar Golf Course that anyone's disappeared beneath the turf -- and is the first time in Illinois that experts can remember of a sinkhole swallowing someone.

Continue for more photos and a video on the incident.