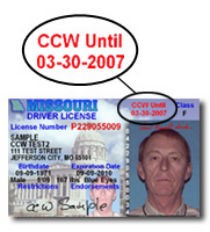 Officials with the Missouri Department of Revenue say they aren't sending people's personal information off to the federal government -- but that's not stopping a lawsuit aimed at protecting the privacy of gun owners in the state.

As we reported last week, a petition from a Stoddard County resident alleges that government officials are unlawfully maintaining records of personal information from concealed-carry permit applicants -- accusations that have sparked widespread backlash from GOP officials in the state. Part of the response includes a bill that would explicitly block the state from keeping these records -- and directs them to destroy ones if they already have.

The state has now responded with details on its record-keeping -- but an attorney tells Daily RFT that the privacy violations and unfair burdens placed on gun owners are still major concerns.

"Our lawsuit is about the collection and retention of this data and the additional new hurdle being put in front of people trying to obtain a concealed-carry permit," says attorney Russell Oliver, representing Stoddard resident Eric Griffin. "We still have questions and concerns."

As we previously reported, Griffin and his attorneys argue that licensing officials required him to scan his birth certificate, residency documents and more when he was applying for a concealed-carry endorsement -- and had already fulfilled all legal requirements. This, they argue, is a violation of privacy and an unlawful mandate.

The case got a lot of attention with speculation that Missouri could be intentionally collecting gun owner information and sending that information off to the federal government or other databases outside of the state.

The Department of Revenue didn't respond to our requests for comment yesterday, but multiple news outlets are reporting that, through testimony at the Capitol yesterday, officials said that the data isn't shared with the federal government or with private companies. The Post-Dispatch says that the documents scanned during license processes go only to a center in Jefferson City, according to DOR comments.

"I don't think there's any evidence at this point that any information has been shared with the federal government," Representative Todd Richardson, who filed the related legislation, told the paper.

But Oliver tells us that his lawsuit -- which has a hearing this afternoon -- still stands, since the primary concern is about the collection of data.

Continue for more of our interview with Russell Oliver and for the full lawsuit.

"While the reassurances that the department has made somewhat assuaged some of the fears...there are still concerns," says Oliver, who attended yesterday's hearing. "This is private, personal information that [Griffin] wants protected and doesn't want in an additional database."

He maintains that it is against the law to force residents to hand over these documents for scanning.

"It's good that the issue is getting fleshed out," he adds. "What we perceive to be a problem is potentially going to be remedied legislatively and judicially."