Will St. Louis Actually Get an IKEA? 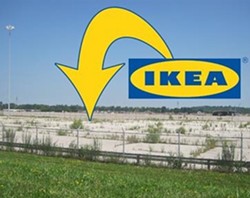 How likely is it that St. Louis might actually, seriously be getting an IKEA?

"IKEA is committed to having a presence in St. Louis, but no decisions on a site have been made final," Stephen Heitz, vice president of development for Pace Properties tells nextstl.com, which is reporting this week that -- according to sources -- IKEA will be opening up in our city. For reals?

The blog even has a specific location pinned down for the future site of IKEA. Where can we expect to get some Swedish meatballs and furniture in St. Louis -- and can we trust the rumors?

NextSTL says that IKEA plans to develop its first store close to the campus of Saint Louis University near the Laclede Gas and Salvation Army Adult Rehabilitation Center complexes on Forest Park Avenue, between Sarah Street and Vandeventer Avenue.

The blog reports that Pace Properties, which had previously attempted to bring IKEA to a Richmond Heights development near Highway 40, is again handling a potential deal, this time, right by SLU.

But an IKEA spokesman gave a pretty non-committal comment to the blog, saying: "IKEA has acknowledged that the St. Louis area is large enough to support a store -- and that we have many customers there -- we have not yet committed to any specific site in, or time-frame for entering the St. Louis area."

Still, based on accounts from the sources cited in the post, IKEA is reportedly expected to build a 300,000 square foot store -- and the project would include ramp construction off of Highway 40. The store, the blog says, could potentially bring more than $6 million in tax revenue to the city. Imagine that.

Check out some of our previous coverage on the IKEA in St. Louis rumor mill:

- IKEA Still Not Coming to St. Louis. Sorry! - IKEA! Why Hast Thou Forsaken Us? - Facebook Fans "Like" IKEA for Chrysler Plant, But Is It Feasible?