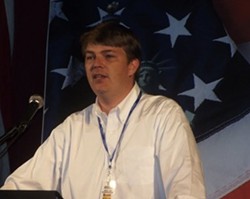 Last week, we wrote about a lawsuit from a Stoddard County resident who was concerned that the Missouri Department of Revenue was violating his privacy by keeping records of his personal information when he went to apply for a concealed carry permit.

Now, a group of Republican lawmakers say they are worried the state could be broadly tracking personal information -- and they've filed a new bill banning officials from keeping copies of documents used to obtain licenses. And if the state has kept these records, they must destroy the documents, the proposal says.

It's a different kind of gun legislation than the proposals making headlines so far this year -- but it's got support from some high-ranking members of the state GOP.

House Bill 787, filed last week, doesn't explicitly mention guns, but does seem to be a direct response to the attention around the Stoddard lawsuit.

As written, the bill "prohibits the Department of Revenue from retaining copies of source documents used to obtain driver's licenses and nondriver's licenses." More specifically:

The department of revenue shall not use technology to capture digital images of source documents so that the images are capable of being retained in electronic storage in a transferable format.

By September 11, 2013, the department of revenue shall securely destroy so as to make irretrievable any source documents that have been obtained from driver's license or nondriver's license applicants.

Daily RFT left a message with the bill's sponsor, Representative Todd Richardson, a Republican, last week. He tells the Post-Dispatch that the legislation is aimed at protecting individuals' privacy.

House Speaker Tim Jones is also a co-sponsor, and as we reported last week, the lawsuit that sparked this debate has the support of Lieutenant Governor Peter Kinder. In addition to the legislation, Republican Representative Jay Barnes has also sent a letter to several state agencies requesting copies of all rules and policies related to the copy and transfer of personal information of those seeking licenses and concealed carry permits, the P-D reports.

Continue for more details on the proposal and the full draft legislation.

A spokesman with the Department of Revenue last week declined to comment on the pending legislation, which targets a local office and not the statewide agency. We've left a message for the DOR on this latest legislation and will update if we hear back.

It's unclear if hese officials have any evidence about improper record-keeping that may violate privacy rights other than the anecdote of the gun owner in Stoddard County; he claims in his suit that a government official required him to scan his entire permit application -- birth certificate, residency documents and more -- into a government system.

This latest debate comes during a legislative season filled with Republican proposals designed to ensure that the government, locally, and federally, does not in any way infringe on the rights of gun owners.

Here's the full bill, followed by the original lawsuit.