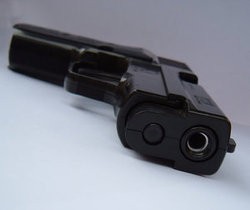 Last month, the mayor and the police chief of St. Louis promoted a new version of their hot-spot policing initiative, in which law enforcement officials target specific neighborhoods for broad clean-up efforts in the hopes of deterring future crime. First stop was the College Hill area, which has been plagued by gun violence this year. A few days after the city's February press event, a 52-year-old man was shot and killed just a few blocks away.

And this week , it appears that the 22nd homicide of 2013 in St. Louis is again in the same area, just north of the city's press conference.

There are few details so far in the latest homicide within city limits -- two days after a violent domestic dispute in which a 37-year-old man allegedly killed his girlfriend, injured her daughter and then was shot dead by police.

Metro police say that Joseph Hawthorne, a 34-year-old black male from O'Fallon Street in St. Louis, was found with gunshot wounds to the head, chest and arm at the 2000 block of Adelaide Avenue by O'Fallon Park.

At around 6:30 p.m, the victim was taken to a local hospital where he was pronounced deceased. The suspects are two black males and the investigation is ongoing.

Incident: Homicide
Location: 2000 block of Adelaide
Suspect: two black males
Dates/Times: 03/07/2013 @18:38
Victim: Joseph Hawthorne, 34-year old black male from the 1500 block of O'Fallon, St. Louis
Synopsis: Officers responded to the above location for a "shooting" and found the victim with gunshot wounds to the head, chest and arm. The victim was transported to a local hospital where he was pronounced deceased. The investigation is ongoing.