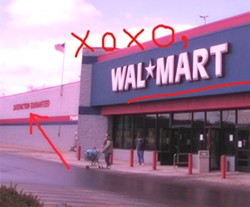 Recently, Psychology Today put out an intriguing little infographic charting the most common places a Craigslist "missed connection" occurs by state. The most lovesick locale in Missouri? Walmart.

Some people might call this the end of romance or a signal of the decline of Western society as a whole, but we wanted to know more.

We mined Missouri's missed connections looking for people who fell in love and blew it under the aphrodisiac spell of low, low prices. After the jump, the best and worst of what we found.

According to the original article, the data was collected from the first 100 missed connection posts in each state. Walmart was the top destination in Florida, Tennessee, New Mexico, Texas, Mississippi, Alabama, Montana, Idaho, Ohio, South Dakota, North Carolina, West Virginia and Arkansas, so we're in good company.

Plus, we would argue, Indiana is way, way sadder. "At home"? Those are some missed connection entries we'd really like to read. (You: Tall, dark, handsome, I wanted to talk to you but was too shy. Me: Your wife. Message me with what side of the couch I'm currently sitting on so I know it's you.)

At least Missourians have the courage to leave the house. Many of the missed connections we read are actually pretty sweet, and if they were written about us we wouldn't care whether they happened at Tiffany's or Taco Bell. Others were a little...unsettling. We, of course, are sharing those in the latter category. Below, the top seven Missouri Walmart missed connections, as illustrated by the People of Walmart:

Saw you at ryans saturday night, kept catching your eye. Had a pink shitt on. Saw you today at walmart In your cowgirl boots with your mom?or some kind of relative. You are blond. I was in the green jacket both times. Email me and if you saw me too that is if you even read this.

5. Hey there, I think I stalked you. This lucky lady had one missed connection and one met connection. Um, and the former really didn't want to let it go:

I talk to you at Walmart on 2/21/13 snow day. You just got off a 16 hr shift at Kellogg's I think you said. You where getting movies from red box, you waited to long and your movie went back in and you had to do it again. This was at the Walmart off Lenexa dr. You gave the a other guy a ride to extended stay hotel up the road. He beet me to you but I would like to take you out sometime. If you see this tell me what color your Toyota is. The better looking guy!!! 4. What the hell is going on here? There's a husband and multiple kids present, but something freaky-deaky is still happening here.

My husband and I bought a small assortment of alcohol from you and we joked because they rang up as bottled "spirits". You guessed what they were for and since one of your guesses was actually right, I'm kinda intrigued and wouldn't mind chatting with you more. Please tell me what we bought besides alcohol (it was two of the same thing), or what your guess was, or how many kids we had with, or something. Lol... Just hoping for a shot at a new friend, so doesn't matter if you're single or not. Thanks :) 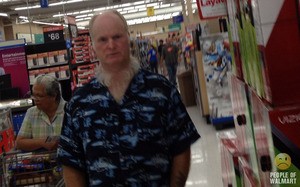 3. This is basically the worst. All joking aside this one sounds just straight up scary.

I seen you a couple days agoDark hair. gorgeous eyes I couldn't see your name tag and you wouldn't tell mebut I know your newYou are so beautiful. I said will you come home with me and you ignored me then warned me about your husband getting me. What you don't know is I can make you much happyer in so many ways. I think your just playing hard to get You will give in eventually so until then keep looking sexy while making me dance in my pants

Luckily someone's got this nice lady's back:

I know of the pretty lady your talking about, she's a sweet gal and can understand your infatuation with her but you honeslty sound a bit demented. It's clear from what you claim she said, she is repulsed by you. A true gentlemen admires from a distance and is not forceful with his advances 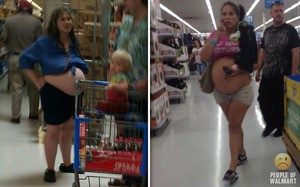 2. You are not only attached, you have a baby on the way! I'd like to ruin that for you.

You were with your wife or girlfriend, yesterday. You were hot. We made eye contact. If you think that you might like to have a discrete meeting (or more), let me know which Walmart we were in, and the approx. time

We saw you at walmart in your camo mini, your fat cat was hanging out. Thought it was a bit cold but your puss didn't mind. I want to see more of yous and what you have to offer. If this was yous what did I say to your youngest?

We also discovered there's a lot of toe-tapping-understall shenanigans happening in Walmart "casual encounters," but that's a tale for another day.