Terence Anderson Allegedly Kills Girlfriend, Shoots Her Daughter, Then is Killed By Police 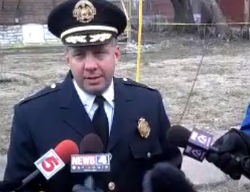 A bloody domestic dispute in St. Louis ended yesterday after police shot and killed Terrence Anderson, a 37-year-old city resident who earlier in the day allegedly killed his girlfriend -- and seriously injured her 15-year-old daughter.

The victim, Nichole Haynes, 32, was found dead on Tennessee Avenue at around 1:30 p.m., after police arrived at the scene in response to a shooting call, officials say. Anderson had reportedly shot Haynes, his girlfriend and her daughter, before fleeing on foot, police say. The mother was shot in the head and pronounced dead on the scene, and her daughter, who has a different father, sustained wounds to the hip and arm -- but survived.

A short while later police found the suspect and engaged in a tense pursuit that ultimately left Anderson dead.

Police say that after the two victims were discovered, officers broadcast a description of Anderson's suspected vehicle -- and found it on the 4100 block of Turner Avenue. Police then used spike strips to give the tires flats.

But Anderson allegedly put the vehicle in reverse and backed toward the officers while pointing a gun in their direction.

"Fearing for their safety, two officers fired their department issued weapons at the suspect," the metro police report says.

He was pronounced dead on the scene, and his gun was recovered.

As is standard policy, the two officers, both 30-year-old males, are now on paid administrative leave.

The Post-Dispatch has some bleak details about the domestic violence. After the mother was first shot, she reportedly ran to a neighbor's house for help. Anderson allegedly followed her there and shot her again on the porch.

Haynes is the 21st homicide victim in the city in 2013 -- found dead less than a week after another alleged domestic incident of a boyfriend killing his girlfriend.

Here's a Post-Dispatch video on the incident yesterday.

And here's the full SLMPD report on the shootings.

Incident: Homicide / Assault 1st / Officer Involved Shooting
Location: 4600 block of Tennessee, 4100 block of Turner
Date/Time: 3/5/13 @ 13:19 to 15:00
Victim #1: Nichole Haynes, 32-year old black female from the 4600 block of Tennessee
Victim #2: 15-year old black female
Suspect: Terence Anderson, 37-year old black male from the 4600 block of Tennessee
Synopsis: Officers responded to a call for a "shooting" as a result of a domestic disturbance. The suspect shot both victims and fled the scene. Victim #1 sustained gunshot wounds to the head and legs. She was pronounced deceased at the scene. Victim #2 sustained gunshot wounds to the hip and arm. She was transported to a local hospital where she is listed in serious/stable condition. A description of the suspect vehicle was broadcast. Officers observed the suspect vehicle in the 4100 block of Turner and deployed spike strips, causing the vehicle's tires to go flat. The suspect then put the vehicle in reverse, backing toward the officers while pointing a firearm at them. Fearing for their safety, two officers fired their department issued weapons at the suspect. The suspect was pronounced deceased at the scene. The suspect's weapon was recovered at the scene. Both officers are 30-year old males with four years of service with the Department. As is Department policy, the two officers have been placed on administrative leave. The investigation is ongoing.