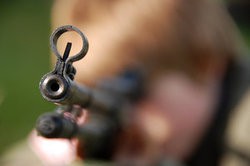 Eric Griffin, a Stoddard County resident, applied to get a concealed-carry permit in Missouri because he didn't want to miss the opportunity.

"His initial motivation...was fear that he wouldn't be able to get one in the future," his attorney Russell Oliver tells Daily RFT. "He's not a big gun nut.... It was out of concern for protecting this right."

But what he uncovered, Oliver alleges in a new lawsuit, is that Stoddard officials, in with the Missouri Department of Revenue, are violating the privacy rights of gun owners by requesting and collecting personal information during this process. How?

The lawsuit, full version on view below, says that Griffin fulfilled all legal requirements and approvals to obtain his official "concealed carry endorsement" before he went to the Stoddard County License Bureau to finish the process by updating his driver's license. There, the lawsuit says, a "fee office agent" told him that on behalf of the Missouri Department of Revenue, it was required that the entire permit application -- his birth certificate and residency documents, such as utility bills -- be scanned into the department's system.

He would not be allowed to receive his concealed carry endorsement unless he let officials scan those personal documents, the suit says.

"Number one -- this is a violation of privacy," says Oliver. "But you are also adding an additional hurdle for something this person has a statutory right to.... My client has done everything he was supposed to to get this permit."

The argument is that under Missouri law, the revenue department is specifically prohibited from "collecting or retaining" any personal information in these processes.

Since the suit was filed on Monday, it has gotten some attention from outside of the state, with some news outlets saying the Department of Revenue may be compiling data on concealed carry holders and forwarding it to a company with ties to the government. Lieutenant Governor Peter Kinder has spoken out in favor of the lawsuit, too -- and staged a press conference this week to express his support. He said in a statement:

This case has issues of statewide importance implicating serious privacy concerns for law-abiding citizens. These folks have followed the letter of the law and been approved for concealed carry by the proper authorities. They must not be required to share that information with any third parties or the federal government.

Continue for more from Russell Oliver and for the full lawsuit.

Oliver says that while this case could be important across the state, they've officially filed suit only against the local department that asked for the information in the county and not the entire Department of Revenue.

A department spokesman says DOR isn't commenting on the litigation.

"Something needed to be done," Oliver says. "It appears as though there's a new illegal hurdle that has been put in place...across the state of Missouri."

He declines to offer any specific accusations against the state, but says, "You'd have to talk to the Department of Revenue. I don't know what their motive is.... They are not doing it for no reason."

On Monday, a judge issued a temporary restraining order on the office named in the suit and a hearing is scheduled for March 12.

And an accompanying press release from the attorney.

JEFFERSON CITY - Lt. Governor Peter Kinder today hosted a press conference in the Capitol to announce a lawsuit filed over the collection and scanning of private documents by the Missouri Department of Revenue for residents seeking concealed carry gun permits.

"I fully support Mr. Oliver in this important legal action in Stoddard County Circuit Court," Kinder said. "This case has issues of statewide importance implicating serious privacy concerns for law-abiding citizens. These folks have followed the letter of the law and been approved for concealed carry by the proper authorities. They must not be required to share that information with any third parties or the federal government."

Oliver said Mr. Griffin went to his local Department of Motor Vehicles fee office after passing the application process for a concealed carry gun permit. When he refused to let DMV employees scan some of his documentation, he was denied the permit.

Oliver said Griffin acted within his rights. He said the Department of Revenue apparently installed new computer equipment to record the information as part of the federal Real ID Act of 2005.

But state laws prohibit the department from retaining and collecting these types of documents and from complying with that portion of the Real ID Act. The data the DOR collected was being forwarded to Morpho Trust U.S.A., a Georgia company that specializes in partnering with state and federal governmental agencies.

"There are important privacy concerns for concealed carry holders who justly fear their information being sent to a third party or the federal government," Oliver said. "Missouri law makes it clear that what is going on here is illegal, and serves no legitimate purpose since the county sheriff is solely charged with the duty of determining applicants' eligibility for the endorsement."

The lawsuit seeks a temporary restraining order to stop the Department of Revenue from collecting and sharing the private data and declare their actions unlawful.