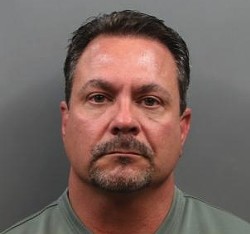 Eight Missouri women say that routine hair removal procedures took a bad turn when the owner of a St. Peter's, Missouri clinic began touching them in places that had nothing to do with the cosmetic services they were seeking.

Lawrence Branam, 48, was indicted this week on a series of counts of sexual assault after more women came forward with allegations of abuse.

"He has moved his business out of St. Peters and is still practicing in St. Charles," Melissa Doss, a St. Peters police spokeswoman, tells Daily RFT.

Why's he still in operation?

Cosmetic Laser Center, the establishment Branam owns, does appear to be up and running at a different location but with the same name. The company's website says they moved to a new location as of October 1.

When police first apprehended the suspect at his work back in 2012, the arrest happened at a St. Peters address at 7030 Mexico Road. The center now has a Jefferson Street address in St. Charles. We left a message for Branam this morning.

What are the allegations?

Doss tells us that there are eight separate victims on the indictment (at one time, there were more, though it appears several decided not to continue on as part of the indictment).

More women came forward with similar allegations to a first victim, who in June of last year, reported inappropriate touching during a laser hair removal treatment. This victim, police say, was getting treated over several appointments and "reported Branam started touching her in areas which were not treated as part of the laser hair removal process."

The touching was "sexual in nature and unwanted," police say.

Doss says that the incidents referenced by the eight victims are from 2010 to 2012 and all accusations were similar. In some, there was inappropriate touching in the vaginal areas and "digital penetration."

Court records show he has an arraignment scheduled for April. He is currently free on bond.

Here's the original news release on his arrest last year.

Branam was charged through St. Charles County Prosecuting Attorney's Office with Assault 3rd in 2011 in a similar incident. The case has not yet been resolved in the State Court.

Currently, Branam has been charged for this incident with Deviate Sexual Assault with a bond of $100,000 through St. Charles County Prosecuting Attorney's Office. He will be transferred to the St. Charles County Jail facility later today.