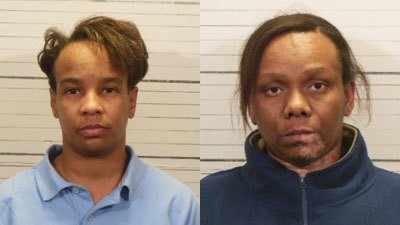 There are a lot of missing details in the alleged beating of a 78-year-old woman in a Caseyville, Illinois, nursing home, but based on the official reports released so far, it's not looking good for the two suspects.

Nina Dorsey, 46, and Julia Tillis, 43, are accused of forcibly removing a handicapped patient from the Caseyville Nursing and Rehab Center Friday -- and then battering her.

The official States Attorney's Office charges, on view below, say that both of them "dropped her on a table."

The charges against both women appear to be the same. Dorsey "knowingly caused bodily harm to [redacted], a physically handicapped person, in that she dropped her on a table," according to the St. Clair County Circuit Court. The charges read the same for Tillis.

This accusation amounts to a Class 3 criminal felony. Bond was set at $50,000.

It's unclear how these two women were connected to the elderly victim.

Caseyville police did not return our calls.

The Post-Dispatch reports that after the woman was forcibly removed from the hospital by the suspects, she was transported to Belleville Memorial Hospital; her condition is unknown.

The suspects were reportedly apprehended in the parking lot of the nursing home and are being held in St. Clair County Jail.

Here are the full charges.