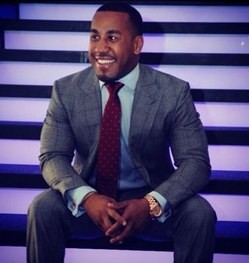 The local races for Board of Aldermen seats in St. Louis don't generally get a whole lot of mainstream media attention -- but here at Daily RFT, we couldn't ignore the craziness that has apparently occurred in the the 27th Ward.

Chris Carter, who has held the seat since October, is up against Committeewoman Pamela Boyd. Both have said some pretty salacious things on Twitter tied to a scuffle last month in which Boyd's 70-year-old husband got in some sort of dispute with Carter at a public meeting. Boyd tweeted that her husband was attacked and rushed to the hospital. And Carter, apparently sick of Twitter attacks against him, sent out this public tweet to an opponent: "you are the reason why your zip code is #1 in STD's and HIV." Actually.

Local politics, y'all! Screenshots galore below.

First, here's a screengrab of a series of tweets from Boyd about the alleged incident on Saturday February 16. 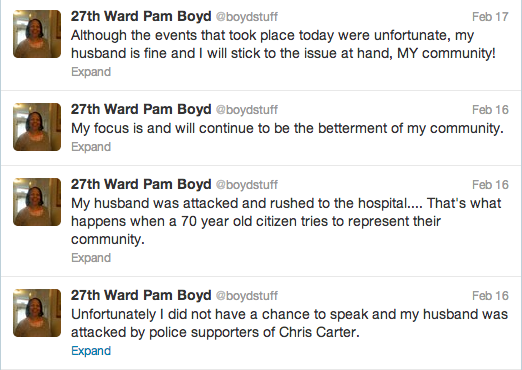 And here's a now-deleted tweet from Carter after the incident directed at someone who was apparently bothering him about the accusations that he attacked the 70-year-old man:

What happened on the 16th?

An official St. Louis metro police report provided to Daily RFT says there was a "general peace disturbance" at the New Northside Conference Center on Goodfellow Boulevard, where Carter was hosting a community event.

The "suspect" is listed as the 70-year-old male, who police don't name, but appears, based on Boyd's tweets and Carter's account, to be Boyd's husband, Nathan, who is a committee man.

At the time of the disturbance there was a meeting at the center being facilitated by Alderman Chris Carter. There was a verbal dispute between Alderman Carter and the suspect who was in attendance at the meeting. The male suspect was issued a summons for general peace disturbance.

Boyd did not return calls for comment. Carter did -- and tells us that Boyd and her husband showed up at the end of the meeting and made a scene, demanding that they be allowed to comment at this neighborhood meeting. Carter says he told them it was too late. 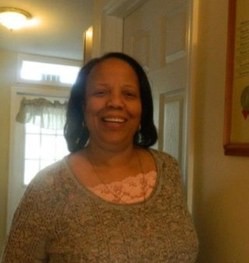 "Her husband was running up to me," recalls Carter, a former state legislator who stepped up to the aldermen seat after a special election in October. "He started putting his finger in my face."

He adds, "I never made any contact with the guy."

"As I'm walking out," Carter says, "This dude is literally trying to get at me."

As his opponent's husband began to cause a scene, police officers approached him to temporarily restrain him, Carter says.

"I felt bad for my constituents that they had to even see that," he says, adding that no one was hurt in the incident.

Boyd posted an account of the event on Twitter that says that Carter was the aggressor; she says the incident left him with bruises and a sprained knee.

"I probably shouldn't have said that," he says, with a laugh. "I started getting tweets...saying it's a shame what you did to that old man."

Once accusatory tweets started mentioning his uncle, a long-time alderman killed in a vehicle accident last summer, it got personal, he says.

"I took offense when they talked about my uncle," he says.

So he fired back: "Whitfield you are the reason why your zip code is #1 in STD's and HIV. Go get yourself a prescription for that bumpy lip bro."

The "Whitfield" in question was someone who was behind some of the attacks against him on Twitter, Carter says.

"I don't know that he has AIDS or HIV," Carter adds. "But at the time, if they are going to put lies out on social media...I'm about to expose this dude.... Afterward, I deleted the tweet.... I acted out of emotion, but they were disrespecting my uncle."

Today is the primary election.