The U.S. Postal Inspector has determined that a suspicious package mailed to Really Big Coloring Books last week is nonhazardous. Still, the St. Louis company that has stirred controversy with its coloring books glorifying the assassination of Osama bin Laden believes that the package was intended to deliver a message.

"There is no doubt in my mind that it was sent to us because someone wasn't happy," says Wayne Bell, founder of Really Big Coloring Books.

The package from Germany raised eyebrows as soon as it arrived Thursday at the company's office in suburban Clayton. Whatever was inside the clear plastic envelope was soaking wet and warm to the touch.

Inside the package investigators found three publications from Really Big Coloring Books -- two of its latest copies of True Faces of Evil (the edition that includes terrorist trading cards) and another coloring book about the oil and gas industry. John Jackman, the U.S. Postal Inspector for St. Louis, tells Daily RFT that the package did not ultimately meet the criteria of the department's threat matrix. It's unclear what left the contents of the package so soggy, but whatever it was was deemed nonhazardous.

"I've been working with paper for over 30 years," Bell says. "And I know that water generally turns paper into a sort of papier-mâché. This liquid had turned the paper almost translucent."

Bell adds that his company has seen an uptick in recent months with orders from overseas -- especially Europe. "These people are paying $100 to special order these books, and not all of them share our values or appreciate our success," he notes.

Since the release a few years ago of its first "cultural and political" coloring books (celebrating everything from the Tea Party to the Occupy Movement), Bell says his company has grown accustomed to hate mail. But it's the 9/11 series of books which glorify the war on terrorism that has really stirred the pot with al-Jazeera as well as Hamas and Iranian news networks calling his office. 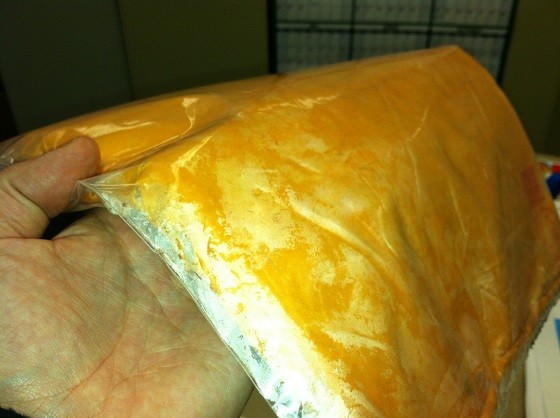 And while those coloring books account for only a small amount of the company's business, Bell says he's not backing down. In fact, he says that Really Big Coloring Books is coming out with something truly explosive in the next few weeks.