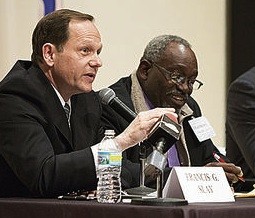 Jimmie Matthews will be the next mayor of the City of St. Louis.

So says Jimmie Matthews, the underdog in tomorrow's Democratic primary race in which incumbent Francis Slay will face off against St. Louis Board of Aldermen president Lewis Reed -- and Jimmie Matthews.

"I'm winning, and I'm gonna win," Matthews tells Daily RFT, standing next to his Matthews for Mayor truck near Tower Grove Park. "I've come to represent the interests of the people, and if the people don't want me and they want somebody else, I don't have any problems with that."

One of his biggest advantages? His zero fundraising total, he says.

Matthews was an alderman and a committeeman in the '80s and is also a retired public school teacher, a real estate broker and has been a pastor for decades.

This is his first time running for mayor.

"There's a void of leadership in the City of St. Louis -- a big void," he says. "There's a lot of signs of bad government, and I felt that it was important to me to articulate some things that I could suggest to the city and the community."

Matthews says his campaign is centered on helping the neediest in the city -- and reforming the corrupt local government.

"The biggest crime in the City of St. Louis is white-collar crime. Politicians are taking payoffs, hiring your family members to take your taxpayer dollars and all that kind of stuff," he says. "Corruption is the biggest crime -- they don't mention that."

In mayoral debates, Matthews has at times provided comic relief, in between the more vicious attacks between Reed and Slay. Once, he said the city should open up city hall for the homeless and said that police should regulate bullets, not guns. In these public forums, he has also been rather blunt in his criticism of both Slay and Reed -- slamming them both as part of the same political machine in the city.

Echoing a campaign theme of Reed, though, Matthews says the city is very divided.

Continue for more of our interview with Jimmie Matthews.

In terms of crime in the city -- violent crime -- Matthews says he is not in favor of more gun control.

"Gun control is the wrong term to use. What about teaching people how to use guns responsibly and don't give a fool a gun? Whether he's a police officer or whether he's a guard...when fools have guns, fools are gonna do foolish things," he says. "You have to deal with the fools that have them."

It's been suggested at times that Matthews was planted in the race to take away black votes from Reed to help Slay, but Matthews emphasizes that he's not tied to anyone -- as evidenced by his lack of campaign donations.

He adds, "I have an advantage, because I'm not chained to any money.... I feel that I have the freedom of expressing the needs of everybody and not just a select few."

Matthews continues, "We are bound by the lies and deception of our political leadership. And politicians are seeking more power and diminishing the power of the people."

Of Slay's opponent, he adds, "Lewis Reed is the shadow of the mayor and the mayor and Lewis Reed have been going hand in hand.... It doesn't matter which one of them wins. Whether Reed wins, or the mayor wins, the guy that gave them money wins."