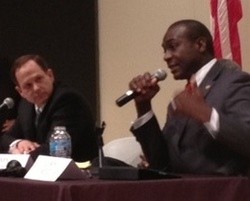 In a mayoral race that has gotten increasingly petty in the final stretch, Lewis Reed, Board of Aldermen president, is trying to focus back on his central talking point of crime. And in a shift in tone from the head-on attacks, Reed's team has been sending out "policy statement" press releases in advance of the Tuesday primary.

Meanwhile, Francis Slay's mayoral office (not the campaign) has rolled out several high-profile plans over the last few weeks that appear to be big-picture policy proposals -- which require another term for implementation.

In one policy statement, Reed discussed the importance of reducing crime by working with the St. Louis Public Schools to identify youth that need mental health services.

As mayor of our city, I will create a Youth Mental Health Task Force within the Health & Human Services Department as a full-time operation that will work with the St. Louis Public Schools, social service agencies, and other institutions for children to address the mental health needs of our children and connect any child in need with the proper resources. We must begin to identify, as early on as possible, the indicators of future destructive and criminal activity, and work with urgency to address those issues and hopefully redirect a child from an early path of criminal tendencies.

"We need to make systematic changes to how we deliver services to kids in our schools," Burleigh tells Daily RFT. "We are talking about...problematic behavior of kids in our public schools and crime.... They are related."

Earlier, the Reed camp sent out a policy statement on banking, saying that as mayor, Reed would move the city to a "linked deposit" program that would help make credit and capital more available. This news release also focused on small business loans.

"We are trying to make sure there is some civility left in the race," Burleigh adds of the policy news alerts.

Continue for more on the mayoral race and the latest documents.

Unsurprisingly, the platform statements have gotten a lot less attention than some of the more headline-grabbing campaign fights -- several surrounding questionable anti-Slay material, promoted by Reed supporters not directly affiliated with the campaign. Reed has also tried to gain traction by pushing a string of alleged Slay scandals, including a controversial water contract, a labor dispute and an alleged pay-to-play scheme.

And Slay's camp has attacked Reed for accepting significant donations from a convicted felon and relying on out-of-state supporters.

And over the last two weeks, Slay's city office unveiled a new kind of hot-spot policing plan for targeted crime reduction along with a long-term plan to "end chronic homelessness" in the City of St. Louis.

Commissioned by Mayor Francis Slay, the plan has three purposes: first, to make our City cleaner, safer, healthier, with less waste of energy and natural resources; second, to attract knowledge workers and others who want more-sustainable spaces and neighborhoods; and third, to make life better and easier for all of the City's citizens.

The plan, which includes a "260-page library of ideas," outlined priorities for implementation -- over the next five years.