Ann Wagner Opposes Violence Against Women Act: "I Was Pleased to Stand Up for All Women"

You read the headline right.

Representative Ann Wagner, who represents Missouri's second congressional district in Washington D.C, voted against the version of the Violence Against Women Act that has now passed both the House and the Senate with bipartisan support. Not that you'd know from her office's fairly confusing press release sent out yesterday.

"Today I was pleased to stand up for all women who are victims of violence and abuse," she said in a statement. "As a result, I voted for the strongest bill that would protect all women from acts of violence and help law enforcement prosecute offenders to the fullest extent of the law."

Which bill is she talking about?

It's not the VAWA news stories were referencing yesterday when they said "VAWA passed" and is headed to the desk of President Barack Obama, who says he will sign it immediately.

The Violence Against Women Act, which provides protections for victims of domestic violence, has faced backlash from Republicans not pleased with added protections for LGBT people, Native Americans on reservations and immigrants. Still, it passed, with the support of some GOP members, first in the Senate and then yesterday in the House.

Some GOP reps like Wagner voted for an amended version, which did not include those specifications. Republicans who supported this amendment, which failed, argue that Dems were politicizing the issue by trying to add on the LGBT and other specifications. 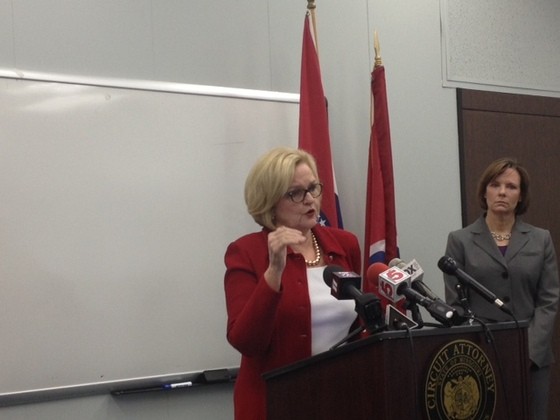 Wagner's statement makes no direct reference to the version of VAWA she opposed -- and because she writes in the affirmative referencing the amended proposal she supported, on quick glance, it almost looks like she did support the bill that Dems are praising this week in their press releases. A rep told us yesterday afternoon she was not available for comment beyond the statement.

WASHINGTON , D.C. - Representative Ann Wagner (R-MO) today issued the following statement after voting for the House amendment to S. 47, the Violence Against Women Reauthorization Act of 2013:

"Today I was pleased to stand up for all women who are victims of violence and abuse. As a result, I voted for the strongest bill that would protect all women from acts of violence and help law enforcement prosecute offenders to the fullest extent of the law. I am committed to protecting all women from domestic violence, sexual assault and stalking. This is not a political issue and Senate and House Democrats who have chosen to politicize the safety of women in the United States should be ashamed. This is exactly what is wrong with Washington and why the American people no longer trust what comes out of Congress. The people of Missouri's 2nd Congressional District expect leaders to lead and get the job done and that is what I will continue to do."