On Christmas day of 2009, Missouri State Trooper Dennis Engelhard was killed in the line of duty while responding to an accident -- leaving behind his long-time spouse Kelly Glossip.

Now, more than three years later, Glossip is still fighting to get basic "survivor benefits" that have been denied to him since he lost his partner of fifteen years -- because the state of Missouri doesn't recognize same-sex relationships. The American Civil Liberties Union of Eastern Missouri will argue today at the Missouri Supreme Court that Glossip deserves the same benefits that the state gives to heterosexual partners.

"He lost his spouse and that's difficult enough," Tony Rothert, ACLU-EM legal director, tells Daily RFT. "But he has the added insult of...being treated like they were strangers by the State of Missouri."

Why are officials continuing to deny his benefits?

In Missouri, when state troopers are killed in the line of duty, the state provides "survivor benefits" for spouses in the form of an annuity of the late employee's salary.

But because the state doesn't recognize same-sex couples, Glossip hasn't been able to obtain any of these benefits since his spouse, a Highway Patrol corporal, died.

"Trooper Engelhard went to work on Christmas morning and didn't come back," says Rothert. "They were spouses -- there's no way to put it other than that. They were completely intertwined.... They mutually supported each other emotionally, financially and spiritually."

He adds, "It's been a very difficult case to work on, emotionally." 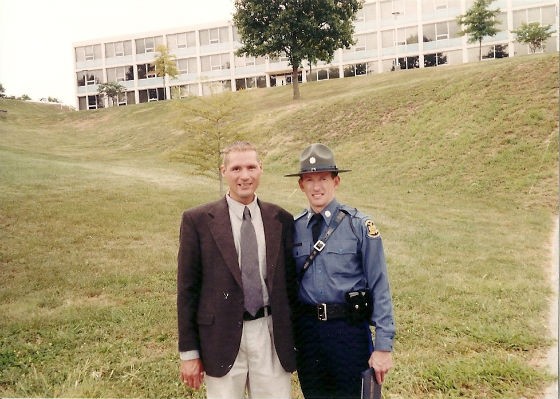 After the accident, Glossip, with the help of the ACLU, tried to get these benefits without legal action -- but was denied at the administrative level. Next step was a petition to the Circuit Court of Cole County, where a judge dismissed the case. The subsequent appeal took the case to the Missouri Supreme Court, which is hearing oral arguments this morning.

This is the final step before the court will issue a decision, which is expected to come out in several months.

The ACLU's main argument, full brief below, is that the statutes that make marriage a requirement for access to benefits are unconstitutional as they've been applied in this case.

"If you're going to exclude a whole class of people from marrying, you can't then make benefits contingent on marriage," Rothert explains.

The ACLU's central goal is to obtain some recognition and relief for Glossip, he says, "to allow him to try and have a little bit of the life he and Dennis built together given back to him."

Continue for more commentary from the ACLU and the full legal briefs in this case.

The official defendant in this case is the Missouri Department of Transportation and Highway Patrol Employees' Retirement System. A spokeswoman for the Attorney General's office, which is representing the state in this matter, tells Daily RFT that they do not have a comment in advance of today's hearing.

But the respondent's brief filed last month, also on full view below, argues that the lower court correctly determined that the statutory classification limiting survivor benefits to surviving spouses or eligible children does not violate "equal protection."

Another part of the state's argument is that Missouri's equal protection clause should not be interpreted more broadly than its federal counterpart.

The couple met in April of 1995 and lived in Robertsville in Franklin County. They had exchanged rings on a Christmas Day years before Engelhard died.

"While the Constitution of Missouri can't bring back Dennis, it can prevent all the other losses that were caused by Missouri law," says Rothert.

Check out more photos and the full legal arguments below.