Update, 12:00 p.m: Mayoral Candidate Lewis Reed has weighed in on the Hitler meme video being promoted this week by opponents of Francis Slay. The footage, on view below, pokes fun at the mayor and his senior staff over a wide range of issues.

"I personally found this video to be offensive and I call on whoever produced it to take it down. These kinds of things don't help bring our city together or bring the kind of change we are looking to bring on Tuesday, March 5th," Reed says in a statement to Daily RFT. "But our campaign shouldn't be held responsible for every offensive film, YouTube video, or Facebook comment produced by someone angry with Francis Slay and his record. We are focused on winning Tuesday's election and beginning the long work of healing our city's racial, geographic, and economic divisions."

Continue for our earlier coverage.

Supporters of Lewis Reed, president of the Board of Aldermen running against long-time Mayor Francis Slay, are passing around a bizarre video this week that presents the mayor and his team as Hitler and the Nazis. It's a take on a popular Hitler video meme that has been floating around for quite some time, in which folks parody a dramatic World War II scene with current events.

Brown plans to reference the video on her show this morning -- though she says she will leave out one part toward the end that she doesn't like.

It's a section that implies Slay is gay and has "impure thoughts" about his chief of staff.

The video, uploaded on Friday, has been making the rounds on Facebook and Twitter, mostly shared by Reed supporters -- just a week before the primary election. It comes from an account called "Renegades For Reed," and uses slightly misspelled versions of Slay's staff.

It hits on some of the central talking points of the Reed camp in the final weeks of the race, including the Slay administration's controversy over a water contract (the topic of our recent cover story), a labor dispute last week regarding a now retracted document and disputes about crime statistics.

Then, the video says the mayor is having an affair and has "carnal thoughts" about his male chief of staff -- which has definitely not been a part of the official Reed campaign platform.

Continue for response from the Reed and Slay campaigns.

The first part of the film, however, is funny and does touch upon some of her concerns with the mayor, says Brown, who has been active in support of Reed and who posted the video on her Facebook page yesterday.

"It speaks to something that's kind of largely unsaid...how the Slay administration runs city government with a 'my way or the highway' [approach]," she says. "So it's amusing to see it in that framework."

And she likes that it introduces all the key players, without directly naming them.

"The fact they didn't say his name...it gives us room to laugh," she says.

Richard Callow, Slay's campaign manger, writes to Daily RFT in a statement: "If playing the race card doesn't work, go straight to Hitler." (The Slay campaign earlier this month slammed a Reed supporter for passing around a flyer that depicted the mayor as a slaveowner and his black backers as his slaves).

And Glenn Burleigh, campaign manager for Reed, points out that it doesn't come from them.

"It is in no way produced by the campaign," he says, but adds, "The angry Hitler meme has been going around the internet for well over around a year at this point.... It's not made by our campaign. I guess a supporter made it and spread it around Facebook."

But, he adds, "Satire is a very important part of politics...whether it be through cartoons or other forms.... It's a goofy, funny way...that is popular now, but they are talking about real issues."

The video was mentioned on a Ladies for Lewis (Reed for Mayor) Facebook page, but it appears to have since been deleted. Here's a screengrab: 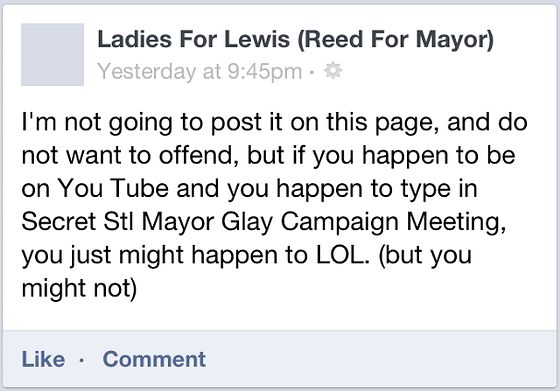 That page is run by volunteers, Burleigh notes.

"I don't know who made it," he adds of the video, saying that several people have sent it his way.

Below are some more screengrabs from the footage: