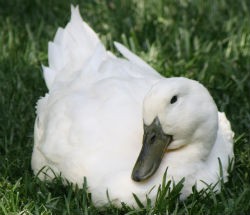 A Wildwood couple rescued eight ducks who they say would have otherwise died -- and now, they are looking for someone to help them take care of the domestic animals. Which is why they've posted an ad for a full-time or part-time animal caretaker on Craigslist.

"There are people who have domestic ducks and then decide it's just too much work and set them free," Dan -- the duck-lover behind the ad who declined to give his last name -- tells Daily RFT. "People abandon these animals and think they are going to live and they just don't."

The eight ducks he and his wife Caryn saved are now part of the family. And they need help.

What does the job entail?

The Craigslist ad says they are looking for:

Full-time or part-time animal care taker/grounds keeper for several rescued "domestic" ducks that are now our pets. Responsibilities include: A) Cleaning their enclosure, B) Feeding, C) Interacting with ducks and getting them snacks D) Tending to disabled ducks, E) Maintaining yard and pond. We are looking for someone who can work 3, 4 or 5 days/per week, from 8am to 3-4pm. Work days to be determined.

And it includes a lengthy list of requirements, including, "positive, outgoing personality," "experience caring for animals," and "physically fit and able to move quickly to keep up with all activities."

What's the backstory of these eight ducks?

Dan, a 57-year-old food entrepreneur, tells us that prior to their current home in Wildwood, they lived in San Jose, California near a public park with a lake.

"There were a lot of domestic ducks...and we didn't know much about them," he says. "Someone dropped off a grey duck and it was following us around and in distress a lot.... We were trying to get someone to help us and didn't know what to do."

The problem, he says, is that because ducks are not considered wild, it's hard to get any shelter or wildlife rescue organizations to care for them.

"Unless they're really injured or hurt, they are not gonna come pick them up," he says.

They brought this duck some food, but at first, the creature wouldn't even eat it until they held it up to the duck's mouth.

"We started taking care of her," he says.

And soon, there were more.

"You could tell they were starved...and sometimes they would get injured or poisoned...and they'd just be lying on the shore about ready to die," he says.

The couple took it upon themselves to rescue them. And eventually they had eight domesticated ducks.

There's Olivia, a white duck who has difficulty walking, due to a disability. There's Norman, an older white duck and "the leader of them all," Dan says. Princess is a grey duck. Gabriel is the "guardian," he says. "If any of them are sick, if any of the other ducks are having problems, he defends them. He takes care of them."

And there's Victor, Joan, Penel (who used to be Penelope until they found it was a male duck) and Brownie.

"They're really, really important to me," he says. "They're like our kids. They get that kind of care."

Continue for more on the eight ducks and more photos.

When they moved back to the St. Louis area three years ago, they took the eight ducks with them.

But it's time-consuming caring for them -- and that's why they are seeking some help via Craigslist. Dan says because they care so much about these ducks and it can be difficult work, they do have pretty high standards for candidates.

"Somebody shows up at 8 a.m., lets the ducks out, cleans up their nighttime enclosure," he says. "And [the ducks] do look for some kind of human interaction...[someone who can] walk them into different parts of the yard, make sure they feel safe."

Since Olivia is crippled, she needs extra care when she is put in the pond and then dried off afterward, for example.

"The work is keeping them safe...and healthy," he says.

He emphasizes that they don't want to take on any more abandoned ducks, but just want to care for the ones they are responsible for now.

"We didn't really plan on this," he says. "We just didn't want to see them die and that's how we ended up with them."

Dan says he would like to see more awareness around the issue of "duck abandonment."

"It's a big problem," he says. "There are domestic ducks in St. Louis -- and if [they're abandoned]...and it's too cold of a winter, they are going to die out there."

And here's the full Craigslist ad:

Duck Care Taker (wildwood)
Full-time or part-time animal care taker/grounds keeper for several rescued "domestic" ducks that are now our pets. Responsibilities include: A) Cleaning their enclosure, B) Feeding, C) Interacting with ducks and getting them snacks D) Tending to disabled ducks, E) Maintaining yard and pond. We are looking for someone who can work 3, 4 or 5 days/per week, from 8am to 3-4pm. Work days to be determined.

Requirements (MUST HAVE ALL BELOW or Please Don't Apply).
1) Reliable transportation and show up to work reliably
2) Quick learner and attention to detail and cleanliness
3) Physically fit and able to move quickly to keep up with all activities. This job is 75% outdoors and you must be able to keep moving quickly to be able to get everything done.
4) Non-smokers, and physically and mentally healthy, only. Must be Drug Free.
5) Experience caring for animals. Those committed to animal care profession, given preference.
6) Positive, outgoing personality.
7) Must be able figure things out on your own at times and adapt to changing weather and seasons, or ducks needs.
8) Must be willing to commit to 12 months.
9) Must have recent work references
10) Preference given to those within 10-15 miles of Wildwood.

Please respond with a written description as to why you would be a good fit for this job. Attach resume with applicable work experience.