Have you ever had your car towed? It's a really awful feeling when you go back to the space where you left it and it's just not there anymore.

Now imagine losing your car and learning that the tow company that took it is actually a sham business that snags cars.

It could happen to you! An entity that goes by the name of Ingram Towing has, on multiple occasions, illegally towed cars, St. Louis County Police say. A suspect was charged this week, but officials are still urging people to report suspicious activity.

How can you spot them?

Police have sent out a handful of photos of Ingram Towing in action. More on view below. 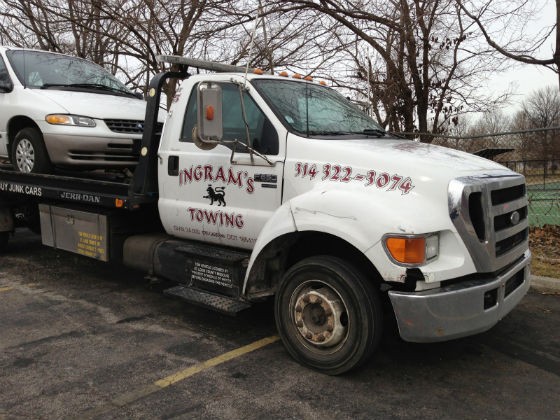 He was charged with one count of stealing a motor vehicle and police say he is a driver for Ingram Towing, based out of Webster Groves. A $25,00 bond was issued.

Police note that the company is focused primarily on scrapping junk cars or vehicles that are more than ten years old. Regardless, Ingram Towing has not had a city or county license to do business as a tow operator since June of 2012, officials say.

The St. Louis County Prosecuting Attorney's Office issued warrants on Wednesday, February 20, 2013 on Leonard T, Ingram, 55 years of age, of the 800 block of Holland, St. Louis, Missouri 63119, for one count of stealing a motor vehicle. Ingram is a driver for Ingram Towing out of Webster Groves. A $25,000 bond was issued, and a photo of Ingram is attached.

Ingram Towing has not had a City or County License to do business as a tow operator since June of 2012. The company has focused primarily on scrapping junk cars (or stolen vehicles that are ten years old or older). We ask the public to report suspicious towing activity to Crimestoppers, the St. Louis County Police Auto Crime Unit or their local police departments.