Police say Garland Carter, 52, was shot and killed yesterday on Warne Avenue in the College Hill area -- just a few days after the mayor's office and the metro police department launched a targeted anti-crime effort in this part of the city.

As we reported yesterday, the city has launched a "hot-spot" policing effort, in which officials concentrate on specifc areas and make physical improvements in the hope of discouraging crime.

Due to a high volume of crime in College Hill so far this year, including several homicides, police chose this neighborhood and staged a press conference to spread the word.

Two days later, it seems the 19th homicide of 2013 happened just a few blocks away.

There are very few details in this latest casualty to gun violence -- and the investigation is ongoing.

Police say that officers responded to a "shots fired" call at the 4300 block of Warne Avenue at around 2:30 p.m. yesterday and found the victim, in front of a residence with several gunshot wounds to his head and neck. Carter, who lived on the 4500 block of Adelaide Avenue, was pronounced dead on the scene.

There are no details about the suspect. 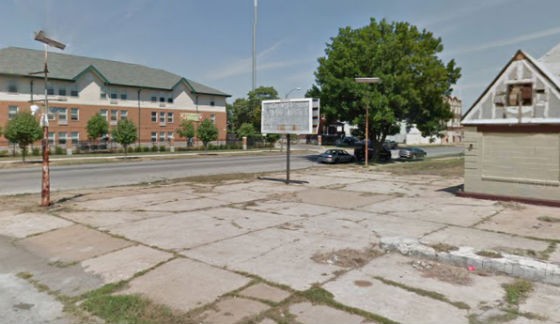 This screenshot shows the site of the shooting, west marker, and the location where the anti-crime initiative kicked off on Wednesday, the east marker.

Incident: Homicide
Location: 4300 block of Warne
Dates/Times: 02/21/2013 @ 1420
Suspect: Unknown Victim: Garland Carter, 52-year old black male from the 4500 block of Adelaide, St. Louis, MO
Synopsis: Officers responded to the above location for a "shots fired" call and discovered the victim in front of a residence with several gunshot wounds to the head and neck area. The victim was pronounced deceased at the scene. The investigation is ongoing.