More trouble this week for Father Lawrence Biondi, president of Saint Louis University -- with another high-profile resignation from someone who says that "trust at SLU has been shattered."

Jay Hammond, the chair of the Department of Theological Studies, has resigned in protest of Biondi's leadership -- and the tenured faculty of the department voted unanimously not to fill the chair's position, as a show of solidarity. A former SLU student sent Daily RFT Hammond's official letter of resignation and lengthy explanation, on view below, which offer an insight into the boiling tensions at the institution.

Part of his explanation is that he was troubled by the private comments of his companions who, he writes, "used words like, embarrassing, evil, sinful, arrogant, bully, and subverting SLU's mission to describe Fr. Biondi's style of leadership."

How significant is this latest controversy?

Today's news comes two months after faculty members made public a lengthy report they submitted to the university's board of trustees that urged the committee to fire Biondi. That report, also on view below, said that both the reputation and financial health of SLU have been badly damaged under Biondi's leadership over the last several years. And in October, faculty of the University's College of Arts & Sciences and the Faculty Senate voted overwhelmingly to censure Biondi with the high-profile no-confidence vote.

This latest resignation comes six months after the dean of the law school resigned in protest.

With this letter I submit my resignation as chair of the Department of Theological Studies effective February 28. Since the Board of Trustees has decided to ignore the Faculty Senate's vote of no confidence in Fr. Biondi I am unable, in good conscience, to continue my service as an administrator at SLU. I do not have confidence in his leadership, so I must resign because the silent majority perpetuates the illusion of Fr. Biondi's effective leadership. I look forward to returning to teaching and research within the DTS.

As I depart, I offer a prayer for SLU: "God grant us the serenity to accept the things we cannot change; courage to change the things we can; and wisdom to know the difference." Now is not the time for serenity. May the Spirit fill the SLU community with courage and wisdom as it collectively yearns for change.

Hammond (who Daily RFT has reached out to for comment this morning) also penned a more than 1,400-word explanation of his resignation that a former student ended up receiving via e-mail and sent our way.

In this letter, dated February 19, he says that his resignation comes in the aftermath of a February 9 SLU Borad of Trustee meeting. He says he wants to make clear that he loves SLU, where he graduated three times and met his wife. He writes, "[T]his is my dream job, because SLU is in many, many ways my home."

Still, he says there are three main reasons why he cannot continue as chair.

In one section he references Rosa Parks as inspiration and writes, "I unequivocally said 'no' to Fr. Biondi's abusive leadership style that fosters a culture of fear; a fear that subverts SLU's mission," adding, "Fear still grips the SLU community. It still grips me. Yet, Rosa convinced me that fear, as powerful as it is, is ultimately not a suitable excuse for inaction."

Continue for more details on Hammond's resignation and the full letters.

Secondly, Hammond says in his explanation that he has not encountered any fellow chairs who have confidence in Biondi.

Third, a handful of SLU Jesuits have been my trusted companions as I have discerned my difficult decision. They tried kept me honest with myself, and I appreciate their counsel. However, their private comments were also the most troubling for me. They used words like, embarrassing, evil, sinful, arrogant, bully, and subverting SLU's mission to describe Fr. Biondi's style of leadership.

Additionally, Daily RFT received a copy of a short Dept. of Theological Studies tenured faculty response that says they voted unanimously not to fill the office of departmental chair -- in support of Hammond and his reasons for resigning. 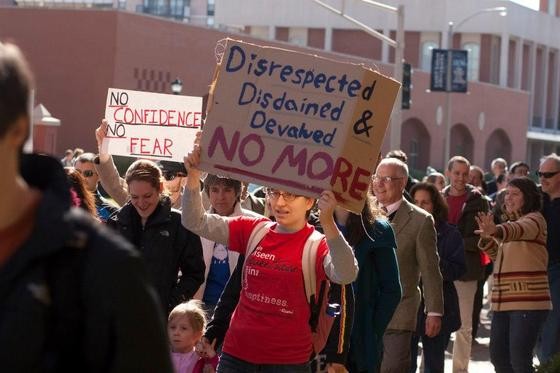 They say that essential paperwork will be handled by the existing associate chair, James Ginther, and faculty who will assist him -- to ensure student and faculty needs can be addressed.

We left messages with university officials this morning and will update if we hear back.

Here's the official letter of resignation with Hammond's full explanation.