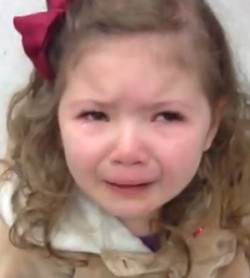 This is not how the Forck family's trip to Disney World was supposed to go.

An Osage Beach, Missouri family says they suffered quite an ordeal at Lambert-St. Louis International Airport earlier this month when Transportation Security Administration officials tried to pat down their three-year-old daughter who is disabled and uses a wheelchair. They filmed part of the confrontation, video on view below, and are now getting national attention for the incident.

"This is about the worst situation you can imagine," Nathan Forck, the 37-year-old father, tells Daily RFT. "It just broke my heart."

Were local TSA agents discriminating against a disabled child?

Here's the chaotic footage, filmed by Nathan's wife, Annie and posted a few days ago with the title "Shh! TSA Wants to Touch Your Kids."

The couple alleges -- and some of this is recorded in the video -- that while they were trying to get to their flight on February 9 from St. Louis to Disney World in Orlando, agents pulled Lucy aside because they said they needed to do additional screening including a "pat down" and "wheelchair swab." They also temporarily took away "Lamby," the three-year-old's stuffed toy, causing the child to burst in to tears.

Two other daughters, ages 11 and 4, were there and witnessed the whole ordeal (and a fourth daughter, age 2, stayed back at home).

"It was very stressful, of course," Nathan Forck tells us. "We were on our way to Disney World. We are not rich people by any means. This was something we had saved for and here we are in line -- the plane is leaving in thirty minutes...and we are being treated like criminals."

He says the TSA agents made it clear that they were singling their daughter out because she was in a wheelchair, which he says is clearly unfair discrimination. 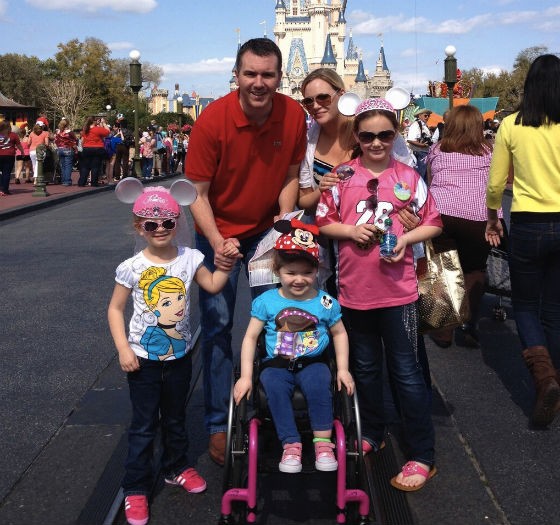 "Because she is in a wheelchair, we have to pat her down?" he says. "That's discrimination against a disabled person -- to just single her out for special treatment because she is disabled."

Lucy has a condition called spina bifida, he says, which means she was born with an exposed spinal cord in her lower back.

"You're not going to put your hand on my child without probable cause," he says.

The situation escalated when TSA agents repeated that they had to pat her down -- and his wife said that she was going to record them if they did.

"You can't touch my daughter unless I can record," she says in the footage.

An agent is heard responding, "It is against the law for you to record," as Lucy continues to sob.

After a lot of arguing and drama, they were finally able to convince the agents to let them carry her through security and have them do a separate check of the wheelchair without Lucy in it, says Forck, who is an attorney that works with the elderly and disabled.

"That's a good solution for a small child that can be picked up and carried," he says. "Not every disabled person is going to be able to be taken through a metal detector."

Continue for TSA's response and for of our interview with Nathan Forck.

A TSA spokesperson sent Daily RFT a statement this morning that says, in full:

TSA regrets inaccurate guidance was provided to this family during screening and offers its apology. We are committed to maintaining the security of the traveling public and strive to treat all passengers with dignity and respect. While no pat-down was performed, we will address specific concerns with our workforce.

Policy says that passengers are permitted to film TSA procedures at the checkpoint as long as it doesn't interfere with the screening process. It is also not proper procedure for a family to be told that a child will have to receive a pat down.

The story has gotten a lot of attention since it was covered yesterday by Fox News.

At this point, Forck says the family does not plan on taking legal action against TSA. He and his wife wanted to spread the word about this mistreatment -- and he's pleased that TSA has responded.

"Our goal was to draw people's attention to it -- to effect change," he says. "They apologized and said what they did was wrong.... We wanted a public statement on what's right and what's wrong."

He says, "I think that's the best we can hope for.... I was really expecting them to double down on their response to this and try to find some fault with us."

Forck says he hopes the ordeal will encourage others to speak up.

"People just need to really research what their rights are," he says. "If people stand up...and know their rights, they'll back down."

Once they made it to their destination, they had a great time, he adds, noting that this was their first family trip.

"Lucy...had an awesome time in Disney World," he says. "She's been through a lot worse stuff than this in her life. She's a tough girl."