One of the more heated battles in D.C. this year so far centers around the reauthorization of the Violence Against Women Act, a measure that provides protection for victims of domestic violence. Congress failed to extend it last year, but it's now under consideration at the House -- after it passed through the U.S. Senate last week.

With no help from Missouri Senator Roy Blunt, a Republican.

Blunt was in the minority of GOP senators who voted no. Republicans have objected to added protections for LGBT people, Native Americans and undocumented immigrants.

Daily RFT asked Blunt why he opposed -- does he not support LGBT protections?

"My prediction is I will vote for the extension of the Violence Against Women Act when it happens," Blunt says in response to our question at the end of his St. Louis press conference last week on mental health. "But when it happens, they will have worked out the Indian reservations issues -- and the other issues that are real problems in that bill."

He adds, "The bill that was on the Senate floor will not ever become law."

Is he concerned with the specific LGBT protections, we ask in a follow-up question.

"I think I just answered the question," he replies, adding, "See you all," as he makes his way out the door of the center where he had staged the news conference. 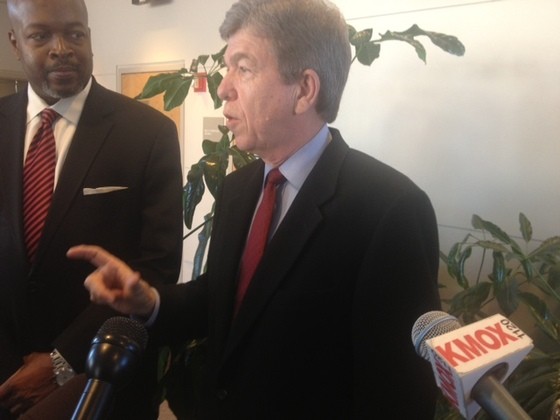 Blunt was one of 22 senators to oppose the bill, up against the 78 that voted in favor of it last week.

Critics of this small minority opposing the measure argue that they are pandering to the extreme right-wing viewpoints; for example, a Post-Dispatch editorial, highlighting Blunt's no vote, says, "Voting against help for people whose sexual or ethnic orientation frequently make them targets for violence won't make them go away."

While Blunt's conservative viewpoints aren't all that surprising -- he has fought against bill to bar employers from discriminating against gays and lesbians -- his vote against VAWA comes at a time when the measure is getting support from GOP politicians as well.

Continue for information on Senator Claire McCaskill's support of VAWA.

Meanwhile Missouri Senator Claire McKsakill, a Democrat, has been rallying support for VAWA.

Here's a recent press release from her office:

"The Violence Against Women Act provides prosecutors and law enforcement the resources they need to protect Missourians from domestic abuse and to assure offenders are held to account," McCaskill said. "This reauthorization has now passed two times in the Senate--the President is waiting to sign it--we're all waiting for action in the House. They need to act."

Last year, McCaskill was joined by every Democratic woman in the U.S. Senate as they signed a letter sent to all the women in the U.S. House, encouraging them to pass the languishing VAWA reauthorization.