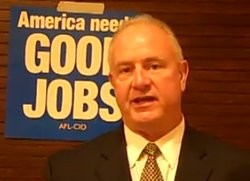 Yesterday, we reported on a controversy pushed forward by Lewis Reed's mayoral campaign, regarding a new agreement form for city hires that critics say is a part of the most draconian, anti-employee policy in St. Louis history. The staff of Mayor Francis Slay -- who will face off against Reed in the upcoming March primary -- is arguing that his opponent is playing politics and misconstruing the facts here.

Still, in response to all the attention, Slay met with some labor leaders yesterday to discuss this controversial form in question. Daily RFT has since chatted with one of the attendees of the meeting, Bob Soutier, president of the Greater St. Louis Labor Council, AFL-CIO.

Is his union satisfied with the mayor's response? And what is Reed's next move?

"He realizes that he may have upset some people," Soutier tells us. "But the mayor has always been good with us."

The AFL-CIO is supporting Slay in his re-election bid.

The document in question, on view below, is a "benefits acknowledgement form" that new city employees have been signing. The part causing controversy says that employees, by signing, are acknowledging that the city can:

modify, amend, reduce or terminate any of the various benefits provided...at any time during the course of employment, including but not limited to pension, health and disability benefits.

The Carpenters Union (backing Reed) and the Reed Campaign jumped on this document on Monday with a press conference slamming the mayor for intimidating employees and forcing them to sign a contract that effectively waives their rights to any benefits -- and union protection -- going forward.

Slay's team, however, says that there is no policy change here whatsoever and that the document exists just to clarify existing policy -- mainly that benefits of new employees are subject to change, which they say is standard practice.

"The meeting went very well," Soutier tells us. "A couple...unions were concerned with the wording.... But [Slay]...has agreed to have one of our lawyers involved in the drafting of the final language."

In response to the backlash, in addition to meeting with labor leaders, Slay has agreed to rework the language in this document so that it is not so harsh, as we reported yesterday.

Soutier says, "Our lawyers will be working with them...to create something that doesn't sound quite as drastic, something that people would be more comfortable with."

Continue for comments from the Lewis Reed campaign and for the full document.

While Slay's team is presenting the redrafting of language as a good faith move to address concerns, Reed's campaign manager Glenn Burleigh says it's obvious that they are backpedaling and changing policy in response to pressure.

"They're pulling it," Burleigh says. "The mayor would not have announced...[that he was] reworking it, if it had not been something bad. Their own act should show that."

But Soutier says, "I'm satisfied with the communication that we've had now."

He says that about twenty new hires have signed this form -- and will likely have it rescinded so they can sign the final draft his union and the mayor's staff agree on.

Does Soutier think this move will satisfy Slay's opponents?

"I doubt they are happy," he says. "They seemed to be somewhat militant about it and that's fine. They have every right to be. It certainly got everyone's attention."