A legislative proposal to ban bicycles on certain state roads throughout Missouri hasn't been introduced yet, but cycling advocates across the state are hoping to spread the word and build opposition to the proposal before it's even debated at the Capitol.

The legislation -- a draft version of which was obtained by advocates and is on full view below -- would prohibit cycling on state roads within two miles of state-owned paths or trails.

"Missouri should be the most outstanding state in the nation for biking -- it's a huge economic draw," Brent Hugh, executive director of the Missouri Bicycle and Pedestrian Federation tells Daily RFT, adding of the bill, "This is completely impractical."

Will this kind of measure have enough support to pass?

A draft of the proposal is currently being circulated around Jefferson City, says Hugh. The expected sponsor is Representative Bart Korman, a Republican from High Hill, Missouri, who has reportedly been sending the draft around in search of cosponsors. Several representatives friendly to MoBikeFed recently forwarded it the organization, he says.

As written in the draft, the bill says:

[B]icycle operation on a state-maintained roadway is prohibited when there is a state-owned bicycle path or trail that runs generally parellel to and within two miles of a state roadway, except a bicycle may operate on the shoulder of a state roadway when the bicycle is operated as a means to ride to or from the operator's home to another residence, to a place of business, to a school, or to any public facility.

"The general idea is, if there's a [bike] path parallel to a road, then bicyclists have to go on the path and can't use the road," Hugh explains. 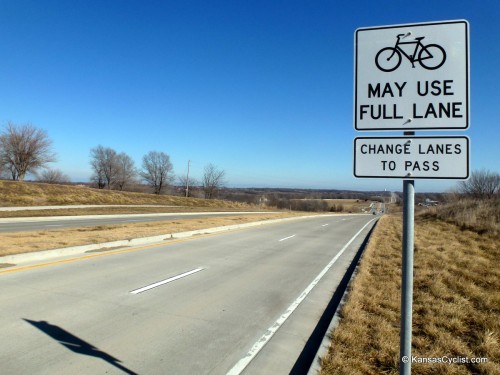 The intention is to get cyclists off roads as much as possible when there's a nearby bike path -- but Hugh and other advocates point out that two miles is fairly far away.

"That's a whole bike ride for some people," he says.

As outlined in the excerpt above, the bill does include exceptions -- if the cyclist is going somewhere on that exact route, for example. But that becomes very much a grey area and is unenforceable, critics argue.

Cycling, he notes, is not just a sport. It's an important mode of transportation that deserves respect and basic protection in the law.

"The people who moan and groan about this...have in mind that people are bicycling just for fun," he says. "But people don't realize that just because you're dressed up in spandex, you could easily be riding to work.... There's a lot of misunderstandings."

Continue for more details on the proposal and the full draft legislation.

Hugh also points out that Missouri is currently considering an $8 billion transportation funding proposal through a tax that voters must support.

"Cyclists aren't gonna vote for eight billion dollars in funding for Missouri transportation...when we are banned," he says.

Generally, these bills are presented as important safety measures -- that it's better for cyclists to avoid roads where cars ride. But Hugh says that these kinds of initiatives never work in practice and notes that his group has successfully fought them in the past.

"It's disappointing to see them trying to turn back the clock twenty years," he says, adding that ultimately drivers just don't want to be inconvenienced, even if they present it as a safety measure. "It's always ironic that the same people that tend to argue that government should not infringe upon our freedoms...say that for bicycle safety, we better ban bicycles on this road. It's a huge philosophical contradiction."

We left a message for Representative Korman on Friday and will update if we hear back.