A Confluence of Geekiness and God's Gift to the Planet: This Week's Bestsellers 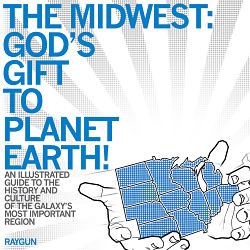 Here's your weekly St. Louis bestseller list for the week ending February 10, as compiled by the St. Louis Independent Booksellers Alliance and based on sales at Left Bank Books, Main Street Books and Subterranean Books.

If you heard a strange exploding sound recently, it may have been the combustion of the minds of our city's science fiction geeks upon the discovery of this week's number-eight bestseller: Doctor Who: Shada: The Lost Adventure by Douglas Adams by Gareth Roberts.

Let's parse this for a second. Apparently once upon a time, Douglas Adams, author of the canonical Hitchhiker's Guide to the Galaxy wrote a script for the equally-canonical TV series Doctor Who. The script was intended to star Tom Baker, the Fourth Doctor, but it was never produced. Instead if languished in obscurity...until now! It wasn't enough to publish the script, though. Instead the publisher decided to publish a novelization of said script, another classic form of science fiction writing, by Gareth Roberts, a master of the form.

Has there ever been a greater confluence of geekiness?

Also new to the list this week: The Future, Al Gore's latest prescriptive on how to save the world; Seven Years to Sin by Sylvia Day, which proves there are other dirty books out there besides Fifty Shades (and thank the good Lord for that!); and The Midwest: God's Gift to Planet Earth!, the first book by the Iowa-based T-shirt collective Raygun, which really needs no other explanation.

1. The Future: Six Drivers of Global Change by Al Gore 2. Never Hug a Nun by Kevin Killeen 3. Tenth of December: Stories by George Saunders 4. Sugar Hill: Where the Sun Rose Over Harlem by Terry Baker Mulligan 5. Secret Daughter by Shilpi Somaya Gowda 6. The Midwest: God's Gift to Planet Earth! by Raygun 7. I Could Pee on This: And Other Poems by Cats by Francesco Marciuliano 8. Doctor Who: Shada: The Lost Adventure by Douglas Adams by Gareth Roberts 9. The Midwife of Hope River by Patricia Harman 10. Seven Years to Sin by Sylvia Day