Video: A Test of "Nutshellz," the Saint Louis-Invented Groin Protector That Can Take a Bullet

But that was before he watched his favorite mixed martial arts fighter, Matt Hughes, take two direct kicks to the family jewels and lose a match in 2006. Raber believes that it was because Hughes kept dropping his hands to protect his marbles (one site declared these some of the "most painful looking nut shots" in UFC history).

"I had that eureka moment," says Raber. "I was just angry, this is just BS that he lost. There's got to be a better way. A design that would absorb the shock better."

From then on, he was on a mission to create an "unbreakable" nut cup. Daily RFT traveled to his studio in High Ridge to answer one simple question -- has Raber discovered the secret to bulletproof balls? Check out our videos below.

Many fighters wear protective cups, but they're stiff and can shatter, even causing "the clothes to come out of the suitcase" as Raber puts it, and getting caught in the wreckage. He wanted to build something shatterproof. 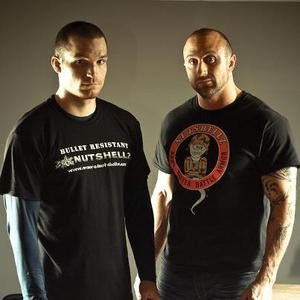 In order to create his cup, Raber layered Kevlar on ultra-high-molecular-weight polyethylene -- two materials many times the strength of steel -- to create a lightweight plate that fits into a flexible rubber shell. He used his own mold and press, and within a few prototypes and ballistic tests saw his creation was bullet-resistant.

"I didn't even see the whole military and police aspect of it -- I thought it would be a great marketing thing," recalls Raber.

But it didn't take long to broaden his horizons beyond professional fighters. Due to the conflicts in the Middle East and the rise of the improvised explosive device, more and more vets are coming home with devastating injuries to their penis and testicles. One estimate says 1,500 military men have suffered serious genital injuries since 2005. In the course of his research, Raber says he heard stories of Drug Enforcement Agents and soldiers who've lost their whole packages in fire fights. That information took the cup's Superman-like qualities from ad-gimmick to practical selling point.

So, does it actually work? Raber loaded up a Glock 34 9mm and a Walther p22, and we headed into the backyard with a couple of Nutshellz cups to find out.

Continue for our videos of the Nutshellz in action.

It's easy to see, in all three videos, that the force of a bullet will still clobber the coin purse. You'll also notice Raber isn't the guinea pig in any of the test runs.

"It's not going to be fun. I wouldn't want to sign up for that at all," he says. " But, yeah, hopefully everything will still be intact and you can come home to your wife."

Nutshellz cost $250 a pop and Raber says each piece takes him about an hour to put together. He's got a small stable of sponsored local MMA fighters, as well as some interested distributors just starting to knock at his door. Raber, who is a full-time employee of the Metropolitan St. Louis Sewer District by day, says he's hoping to at least make his $100,000 investment back.

"Nothing about stopping bullets is cheap," he says.

Find Nutshellz at his website ArmoredNutshellz.com or on his Facebook page. Helmet-wearing sperm t-shirts are available as well!