If you don't want sad news on Valentine's Day, we recommend you read no further. Today, we bring you the story of what appears to be a horrific homicide in St. Louis County this week -- in which Sophia Moore, 28, was allegedly punched and stabbed to death by her estranged boyfriend.

The suspect in the Jennings homicide, 32-year-old Calvin Campbell, is now in custody and has been charged with murder.

What happened to the kids?

Fortunately, it appears the two young children were not harmed. And police report that they were turned over to their biological father at the scene.

The St. Louis County Prosecuting Attorneys' Office yesterday issued warrants on Campbell -- who lives on Osceola Street in St. Louis -- for one count of second-degree murder and one count of armed criminal action. No bond has been issued.

Officers in the St. Louis County Police Department Jennings Detail had responded to a stabbing at around 10 p.m. on Tuesday night at Moore's house on Dawn Court in Jennings. 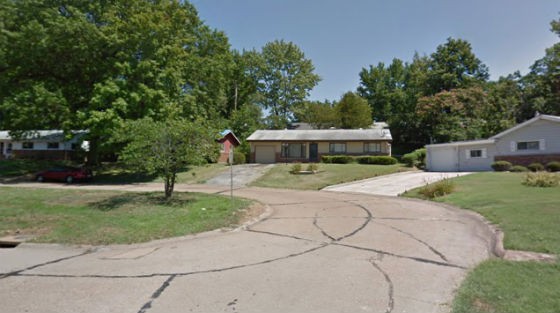 Campbell, who police identify as an "estranged boyfriend" of Moore who was kicked out of the home a week prior, had returned that night.

He is accused of violently beating on the front door until Moore let him in.

Then as soon as he entered, he allegedly began to punch her as she tried to escape through a back kitchen window. He reportedly puller her back in and then stabbed her several times with a long kitchen knife.

After witnessing the bloodshed, her two boys then fled to a home of a neighbor, who called the police, officials say.

Three-and-a-half hours later, Campbell turned himself in to investigators.

On Wednesday, February 13, 2013, the St. Louis County Prosecuting Attorneys' Office issued warrants on Calvin Campbell, 32 years of age, of the 3100 block of Osceola in St. Louis, Missouri, 63111 for one count of Murder in the Second and one count of Armed Criminal Action. No bond has been issued. A photo of Campbell is attached.

Warrants were issued after officers in the St. Louis County Police Department Jennings Detail responded to a cutting at 9:56 P.M. at the 9400 block of Dawn Ct. in Jennings. The estranged boyfriend, Campbell, who was reportedly kicked out of the home about a week prior, returned and violently beat on the front door until the victim, 28 year old Sophia Moore, eventually let him inside. As soon as Campbell entered the residence, he allegedly began to punch Moore and a fight ensued. Moore attempted to exit the residence through a back kitchen window, but Campbell reportedly pulled her back inside and stabbed her several times with a long kitchen knife. This was witnessed by her two sons, ages eight and nine.

Campbell turned himself in to investigators approximately three and a half hours later at the St. Louis County Jennings Detail Station. The children were turned over to their biological father at the scene.